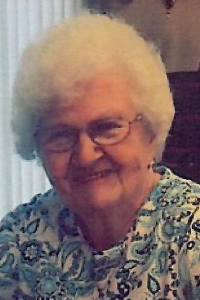 LEICESTER: Helena M. (Knox) Blake, 90, of the Rochdale section of Leicester, died peacefully on Monday, July 29 in her home after a long battle with cancer.
She was the wife of Donald I. Blake who died in 1989. She leaves a son David W. Blake and his wife Mary of Leicester, her daughters Pamela M. Parent and her husband Robert of Leicester and Deborah A. Connor and her husband Thomas of Quinnebaug, CT., a brother Herbert Knox of Worcester, three sisters Alma Morrow of Oxford, Lois Richardson of Worcester and Judith Mikat of Cherry valley, five grandchildren; Sheri Reilly, Amy Firlings, Lori Martinez, Megan Friend and Donald Blake, ten great grandchildren; Colleen, Nolan, Megan, Helena, Matthew, Mary, Tyler, Delaney, Jaxton and Camden, several nieces and nephews. She is predeceased by brothers Charles, Walter and Robert Knox and a sister Norma Pong.
Helena first worked at Telechron, then at Press Met Corp. in Worcester before retiring in 1990.
Helena loved her family dearly. She was a Grammy to all that met her. She lived to take care of her family and loved when everyone was together. She was a true matriarch and led by example, spreading love and pure kindness wherever she was. She had an independent spirit and spoke her mind, but lovingly and with humor. Helena had a talent in making sure everyone was taken care of before herself. She also had a competitive spirit in playing her favorite games of yahtzee, rummy and bingo. As long as she was surrounded by her family, all was right in her world.

Born in Worcester, she was the daughter of Horace F. and Anna B. (Starbard) Knox and later graduated from Commerce High in Worcester.
Funeral services will be held on Thursday, Aug. 1 at 10 a.m. in the MORIN FUNERAL HOME, 1131 Main St., Leicester. Burial will follow in Worcester County Memorial Park, Paxton. Calling hours are Wednesday from 5 to 7 p.m. in the funeral home.
In lieu of flowers, contributions may be made to the St. Vincent Hospital Cancer & Wellness Center, 1 Eaton Place, Worcester, MA 01608 or VNA Hospice of Central MA., 10 Trade Center, Suite G-500, Woburn, MA 01801.