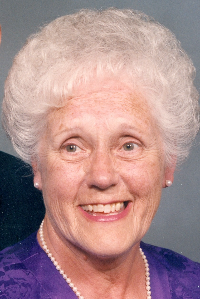 
Maureen Cassidy, a longtime resident of Woburn, passed away peacefully at her home with her loving family by her side, July 26, 2019. She was 92. Maureen was the beloved wife of the late Robert A. Cassidy. Born in Lurgan, Ireland she was the daughter of the late Isaac and Sarah (Fryars) Allen.


Maureen was raised in Newtonards, Ireland and as a young lady she worked as a seamstress. She married her beloved Robert in 1949 and the young couple came to the United States in 1950 settling in Woburn. Together they brought four children into the world and Maureen's life was devoted to providing and caring for them, making sure that her home was always a warm and welcoming place for her family. Maureen was a talented baker and over the years she enjoyed spending summer vacations in York, Maine. She will be fondly remembered for her love and devotion to her husband and family and will be greatly missed by those she loved.


A funeral service will be conducted in the McLaughlin - Dello Russo Family Funeral Home, 60 Pleasant St., WOBURN, Thursday, August 1st, at 11 am. Relatives and friends are respectfully invited to attend. Visiting hours will be held on Wednesday from 4 to 8 p.m. Services will conclude with burial at Woodbrook Cemetery, Woburn.