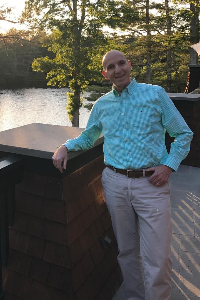 George P. Anastos, age 74, of Woburn and Falmouth, formerly of Cambridge and Wakefield, Mass., passed away unexpectedly on July 22, 2019. He was the beloved husband of Joan M. (Paraskeva) Anastos for over fifty years, and the devoted father of Alexa Coye and her husband Kevin of Plymouth, Paul Anastos of Medfield, Cyndi Smith and her husband Ryan of Hingham. He was a loving Grandfather & "Pouli" of Lucas and Eviana Coye, Colin Anastos, Luca Lazzara, Carley and Casey Smith and brother of William Anastos and his wife Carol of Revere, Betsy Grigoropoulos and her late husband Ernest of Medford. George also is survived by many loving nieces and nephews.

George grew up in Cambridge and graduated from Northeastern University before furthering his education with a Masters from Bentley University. Married in June of 1969, he and Joan raised three children in Wakefield. George was a Veteran, who’s career led him to hold positions at PricewaterhouseCoopers and Damon Corporation before he formed his own accounting business which he successfully ran up until his passing. He never went anywhere without his classic, hard-sided lid over box briefcase. Everyone turned to George for his expert advice on personal finances and taxes because of his notorious attention to detail and knowledge. While tax season is something that most people dread, it was second only to Christmas for George because he truly loved his clients and his work.

A fitness and sports enthusiast, George was a member of the Cambridge Rindge Tech Hall of Fame. He took great pride in being part of the school’s iconic basketball team of 1962, which overcame a drought of 20 years by winning the Class A Tech Tournament defeating Brockton at the original Boston Garden. In his later years, he coached his son’s basketball teams and never missed a game that any of his children participated in. Over the years, he ran more than a dozen Falmouth Road Races – a legacy that his children are carrying on.

A season ticket holder for more than forty years and a member of the Fan Hall of Fame, George’s love for the Boston Celtics and all Boston sports was only rivaled by his deep love for his family and friends, whom he treasured spending summers with on Falmouth Heights Beach; this is where he felt happiest and most at peace. He was devoted to his family and nothing else came first.

George was kind, generous and had the best sense of humor. He brought warmth and light to every room he entered and made everyone in his presence feel welcomed and comfortable. His integrity, grit, and passion were beyond compare. He gave the best hugs that will forever be cherished by his loved ones and he was never afraid to take a cupcake to the face if it meant making his grandchildren laugh. To know him was to love him and he will be missed eternally by so many.

Relatives and friends are respectfully invited to attend visiting hours on Thursday, July 25th from 4 to 8 p.m. at the McLaughlin – Dello Russo Family Funeral Home located at 60 Pleasant St., Woburn. Funeral services will be held Friday, July 26th at 10 a.m. at the Annunciation of The Virgin Mary Greek Orthodox Church, 70 Montvale Ave., Woburn. Services will conclude with burial at Woodbrook Cemetery, Woburn.
It has been requested that in lieu of flowers contributions in George's memory may be made to the Dana-Farber Cancer Institute and the Jimmy Fund, P.O. Box 849168, Boston, MA 02284-9168.