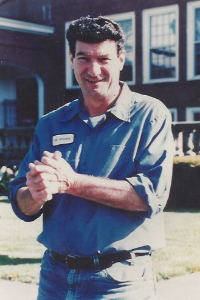 …beloved husband, father, grand and great grandfather; 79
TEWKSBURY - Mr. Peter L. “Sandy” Amorella, age 79, died peacefully on Friday morning, July 19 at his “happy place,” his R.V. in the Ogunquit R.V. Resort in Wells, Maine, in the loving care of his family and Hospice after a brave and courageous four year battle with Mesothelioma. He was the beloved husband of Patricia A. (Masiello) Amorella, with whom he had celebrated a fifty-seventh wedding anniversary this past July 1st.
He was born in Boston in November, 1939, one of two sons of the late Patrick J. and Alda M. (Goodwin) Amorella, and was raised in Chelsea. He was a graduate of Chelsea High School. He and Pat moved to Tewksbury in 1975 to raise their family.
In his early career, he was a truck driver for Jet Air Freight company, and was a member of AFL-CIO Teamsters Local 25 in Boston. He changed careers to become a custodian in the Belmont school system, and retired as Head Custodian for the system after twenty-four years of service.
Peter was active at St. William’s Church, as an usher at the 9:30 a.m. Sunday Masses.
In addition to his beloved role as husband, father and grandfather, he was also an accomplished clock collector.
Peter was predeceased by his son, Michael Amorella, and brother, John J. Amorella.
In addition to his wife, he leaves three children, Lisa Paulitzky and her husband William of Winchendon, Michelle Moore and her husband David of Hudson, NH, and Patrick Amorella of Tewksbury; seven grandchildren, Christopher Amorella and his wife Cathy of R.I., Alyssa Amorella and her fiancée Kurt Carvello of R.I., Nikki Kendall and her husband Ryan of Winchendon, Eric Paulitzky and his wife Jill of Leominster, Melissa Niles and her husband Tim of Winchendon, David Moore and Jonny Moore both of Hudson, NH; four great grandchildren, Aaron, Thomas, Chase, and Parker; and several nieces and nephews.
Visiting hours Wednesday 9:00 a.m. until 11:00 a.m. in the Tewksbury Funeral Home, corner of 1 Dewey and 975 Main Sts. (Rte. 38) TEWKSBURY CENTER, Ph. (800 in MA or 978) 851 2950, followed by a Funeral Mass at 11:30 a.m. in St. William’s Church, 1351 Main St. (Rte. 38) Tewksbury. Interment will be private. Kindly omit flowers. Memorials to the Shriner’s Burns Institute, Development Office, 51 Blossom St., Boston, MA 02114 visit www.shrinershospitalsforchildren.org/boston or York Hospital Hospice, 127 Long Sands Rd., York, ME 03909 - www.yorkhospital.com/services/home-care-hospice. See: tewksburyfuneralhome.com