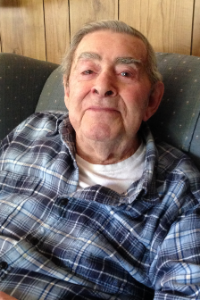 Born and educated in Provincetown, he was the son of the late Henry and Lillian (Santos) Martin. A graduate of Provincetown High School, he joined the Army at the onset of the Korean War. Upon returning home, he met Nancy and the two were married for 64 years.

Throughout life, Kenny had many jobs and was known as a hard worker. In his spare time, he enjoyed hunting, fixing things and riding his blue moped around town. He retired from the Town of Provincetown in 1993 after working for the Water Department for close to 30 years.

In addition to his wife Nancy of Provincetown, he leaves his children: Joyce & Sonya Martin, Monica Fimple and husband Tim Williams, Kenneth Martin Jr. and wife Mary, Craig Martin and partner Andrea Lavenets, and his grandchildren: Kelsea Martin, James & Casey Hanf, Michael & Kelly Martin as well as four great grandchildren: Bryson, Blake, Cameron & Aubrey. He also leaves behind many nieces and nephews as well as his brother Ronald ‘Gus’ Martin. He was predeceased by his siblings Helen, Robert & Lillian.

Kenny’s family would like to express their sincere gratitude to the Seashore Point staff who provided him with such great care.

Family and friends are invited to call at the Gately Funeral Home, 94 Harry Kemp Way, Provincetown on Tuesday morning, July 23rd from 9:00 to 11:00 am. Burial, with Military Honors will follow in Provincetown Cemetery.

If desired, donations in Kenny’s memory may be made to the Provincetown Rescue Squad, PO Box 109, Provincetown, MA 02657.