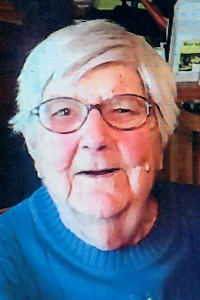 CHARLTON: Ruth E. (Pierce) Fanion, 88, of Cranberry Shore Rd., died peacefully, Monday, July 8 at Overlook Masonic Home in Charlton.
She leaves her husband of 68 years, Clarence C. Fanion, her sons Joseph A. Fanion and his wife Carol of El Paso, TX., James C. Fanion of Southbridge and Barry C. Fanion of Charlton, her daughter Susan T. McConnell of Southbridge, 7 grandchildren, 14 great grandchildren, many nieces and nephews. She is predeceased by her daughter Linda M. Shiraka of Penn.
Ruth was one of 10 children born to Chester and Hazel (Stone) Pierce. She worked at Reed & Prince Mfg. in Worcester prior to her retirement in 1995.
A Memorial Service will be held on Tuesday, July 16 at 10 a.m. in the J.HENRI MORIN & SON FUNERAL HOME, 23 Maple Terr., Spencer. Burial will follow in Worcester County Memorial Park, Paxton. A calling hour will precede the services on Tuesday from 9 to 10 a.m. in the funeral home.
In lieu of flowers, contributions may be made to the Alzheimer's Assoc.of MA, 480 Pleasant St., Watertown, MA 02472.