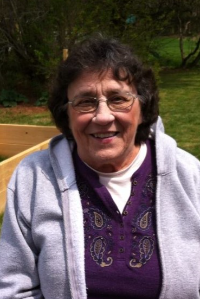 LIMERICK – On, July 6, 2019, a wonderful woman was lost to complications of lung disease. Georgia A. Perry, 80, passed away peacefully at the Gosnell House in Scarborough, surrounded by her loving family. Georgia was born in the home of her parents, Emil A. Kohutek and Matilda (Tillie) B. (Svrcek) Kohutek, of Rowena, Texas, both of Czech descent, and only spoke the Czech language at home. Georgia did not learn English until she entered first grade. She graduated Valedictorian in 1956 from St. Joseph’s High School, and was a parishioner at St. Joseph’s Church, both in Rowena, and then at St. Matthew’s Church in Limerick.
As a young girl living on a farm, she picked cotton until she graduated from high school. Immediately after graduation she was employed at the San Angelo National Bank where she worked on posting and IBM machines. She married Richard W. Perry in 1957, moved to Maine, and sold real estate for 11 years. For the next 37 years, she was most proud of the integral part she played in the realization and creation of the Willowbrook At Newfield Museum. She spent several years restoring artifacts and buildings, until the official opening of the Museum in 1970, and continued her restoration work that included the 1894 Armitage-Herschell carousel, while also serving as the Director of the Museum, until her retirement.
Georgia’s hobbies and pastimes were working on crossword puzzles and cryptograms and she was an avid golfer for many years. She had a picture puzzle on her table at all times, and she also enjoyed going to the Mill in Limerick and to the Oxford Casino.
She is survived by her brother, James Kohutek and wife, Mary Jane of Dallas, Texas; three daughters, Carla Bart (Gary) of Bellaire, MI; Tracy Kelley (Jay) of Old Orchard Beach; and Sandy Levesque (Mark) of Limerick; eight grandchildren and 14 great-grandchildren.
The family would like to recognize the exceptional staff at the Gosnell House for their caring and kindness while Georgia was in their care.
The family will receive visitors on Wednesday July 10 at Poitras, Neal & York Funeral Home, 71 Maple Street (Rt. 25), Cornish, Maine, from 2:00 to 3:00 p.m., with a memorial service directly following. Online condolence messages can be submitted at www.mainefuneral.com

In lieu of flowers, friends and family may choose to remember Georgia
through support of the Gosnell Memorial Hospice House
11 Hunnewell Road, Scarborough, ME 04074