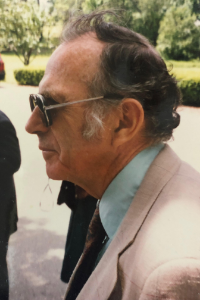 James Kevin (Jim) Owens, age 87, of Medford, died June 28th. The youngest of 6 children, James was born on November 30, 1931 in Washington D.C. to Belinda Feeney Owens and Joseph Michael Owens. He is survived by his wife Elizabeth Boyle Owens and his five children and their spouses: Ellen Owens and Susie Amster of Oakland, CA; Mary Talcherkar and Nakul Talcherkar of Milton, MA; Jennifer Owens of Nashua NH; Neil Owens of Okinawa, Japan; and Deirdre Owens and Jonathan Williams of Los Angeles, CA. He also leaves behind his grandson Brendan Owens and Brendan's mother Lara Owens of Amesbury, MA, as well as many nieces and nephews.
He earned a B.A. from the University of Maryland in 1955, and an M.A. from Georgetown University in 1962. He was an archivist at Syracuse University, served as Director of the New England Regional Archives from 1969 to 2000, and retired as Director of Archival Operations for the National Archives and Records Service New England Region in 2002. He was a member of New England Archivists from its inception in 1973 until his retirement.
James held leadership positions in the Medford Plan E. Civic Association, the Medford Historical Society, the West Medford Reading Club, and the Maple Leaf Square Dance Club in Florida. He was also a member of the Medford Garden Club, Royall House Association and the Brooks Estate Preservation Society. A long-time member of Saint Raphael’s Parish in West Medford, he helped raise money to rebuild its church after a fire in 1990.
James was interested in sports, politics and square dancing, and later in life discovered a talent for drawing in pastels, and pen & ink. He enjoyed walks, gardening, and dogs that did not bite him.
Visiting hours will be held on Friday July 5, 2019 from 4:00 – 7:00 pm at Beals-Geake-Magliozzi Funeral Home, 29 Governors Avenue, Medford. A Mass of Christian burial will be held on Saturday July 6, 2019 at St. Raphael Church, Medford at 10:00 am. Interment at Oak Grove Cemetery in Medford. Memorial contributions may be made to The Audubon Society or St. Vincent de Paul. For additional information or to send condolences, please visit www.magliozzifuneralhome.com.