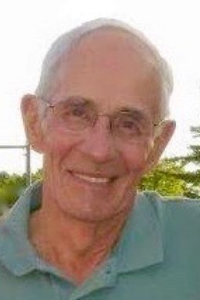 Laconia---On June 19, 2019, Frederick P. Zecha, Sr., age 85, peacefully passed from our midst surrounded by his family after a brief illness.

Fred or “Chubby,” as he was known by his friends and family in Keene, was a three sport athlete at Keene High and a basketball player for Keene State, where he dated and married Joan.

To his grandchildren, Grampa or “Gramps” was known and loved for the doll houses he built for granddaughters, sparklers on the 4th of July, his doorway-wide shoulders, his grumpy sense of humor, and his iron grip, which he maintained to the end.

Fred enjoyed reading about sports history and historical fiction, watching his grandchildren play sports, the Boston Red Sox, and the blessings of a family who loved him and will miss him.

Fred is survived by his wife of 63 years Joan (Bemis) Zecha of Laconia; his children, Frederick “Rick” Zecha, Jr, and his wife Darcey of Keene; Cindy (Zecha) Salta, and her husband Bill of Laconia; and Jason Zecha and his wife Donna of Concord; eight grandchildren, Alexis and Frederick “Erick” Zecha, III; Meg, Will, James and Andrew Salta; Audrey and Sarah Zecha; two sisters-in-law and several nieces and nephews. He is predeceased by his parents Ernest and Rosamond Zecha , his brother Ernest “Buddy “ Zecha and his sisters, Barbara Yoerger, and Joan Sebert.

There will be a graveside service on Saturday June 29 at 11:00am at the Monadnock View Cemetery on Park Avenue in Keene.

If you would like to leave a remembrance for Fred, please make a donation in Fred’s name payable to the “KSD Trustees of the Trust Funds” in order to support scholarships for Keene High School athletes. Those donations can be sent to 193 Maple Ave, Keene, NH 03431.

Wilkinson-Beane-Simoneau-Paquette Funeral Home & Cremation Services, 164 Pleasant Street, Laconia NH is assisting the family with the arrangements. For more information and to view an online memorial go to www.wikinsonbeane.com.