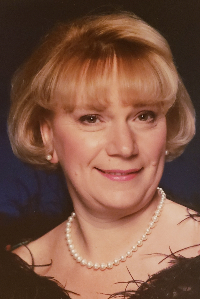 METHUEN, MA…Geraldine P. (Porada) Munroe, 78, of Methuen passed away Thursday, June 20, 2019 at the Halcyon House Nursing home in Methuen.
She was the loving wife of the late Earle R. Munroe.
Born in Fall River, she was the daughter of the late Stanley J. Sr. and Mildred A. (Dopart) Porada. She was raised in Tiverton and moved with her husband to Wethersfield, CT where she spent her married life. In late 2016, she moved to Methuen to be closer to her family.
Mrs. Munroe was the owner of the former Classics Limited of Wethersfield, CT. She was a communicant of the Church of the Incarnation in Wethersfield and enjoyed traveling, hosting parties and spending time with her family. Geraldine graduated from the former Mount St. Mary’s Academy of Fall River and went on to earn her Bachelor’s Degree in History from Salve Regina University. Following Salve Regina, she earned her Master’s Degree in Special Education from the University of Hartford. Throughout her life, she had earned several awards including the Philip Larkin Outstanding Service Award in 1989 and the Yankee Meeting Planner International Supplier of the Year Award in 1992. She was a former member of the Governor’s Tourism Council, the YMCA International Board of Directors, the YMCA Board of Directors, the Wethersfield Committee on Culture and the Arts, the Greater Hartford Tourism Board of Directors, the Old Town Tourism District, the Wethersfield Women’s Club, the Wethersfield Republican Party, the Women in Transportation, the Yankee Meeting Planners International, the Business Travel Association, the Salve Regina University Alumni Association, was a Justice of the Peace in Wethersfield and was the Wethersfield Senior Citizen Volunteer Coordinator.
Survivors include her daughter: Stacy Munroe-Danehy and her husband Kevin of Methuen; her son: Scott Munroe of Lynn; her grandchildren: Sierra Munroe, Griffin Danehy and Grayson Danehy and several nieces and nephews. She was the sister of the late Stanley J. Porada, Jr.
Funeral Mass to which relatives and friends are invited will be held Tuesday, June 25, 2019 at 11 AM at St. Stanislaus Church, Rockland St. Fall River followed by burial in Pocasset Hill Cemetery, Tiverton, RI. Arrangements are entrusted to Boyko Memorial Funeral Home, 709 Broadway Fall River, MA 02724. In lieu of flowers, gifts toward a scholarship for history students in her memory will be accepted by Salve Regina University, 100 Ochre Point Avenue, Newport, RI 02840, www.salve.edu/give-scholarships.