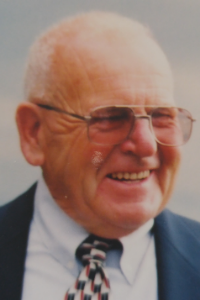 Roger W. Young, 93, of Columbia, NH, passed away peacefully on Saturday, June 8, 2019 at this home, with family by his side. He was born in Pittsburg, NH on August 6, 1925 the son of Jesse W. and Florence (Whitney) Young and was a lifelong resident of the area. He and his wife, Beth, spent their winters in Florida for many years. Roger had been employed by NH DOT for 33 years, retiring in 1986 as highway foreman. He was a member of the Evening Star Lodge #37 F & AM and was a Past Master of the lodge. He had served as an Aide for Bill Styles, Potentate of the Bektash Shrine at that time. He loved hunting, fishing and horses and rode horseback until the age of 80.

Graveside Services will be held on Saturday, June 15, 2019 at 11:00 AM at the Colebrook Village Cemetery in Colebrook, NH. A Masonic Service will be held at 10:45 AM on Saturday at the cemetery, prior to the funeral. There will be no calling hours. Donations in his memory may be made to: The Shriner’s Hospital for Children-Springfield, Development Office, 516 Carew St., Springfield, MA, 01101.