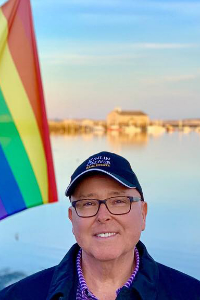 
John Vincent Donovan III, 65, entered into rest on Friday June 7, 2019 after a long, courageous battle with cancer. John passed surrounded by family & friends in Provincetown, MA, the town of his summer residence and also where he truly felt at home.

He was born in New Haven, Connecticut on April 18, 1954, the son of the late John V. and Evangeline (Ciminski) Donovan Jr. John is survived by his loving brother Michael Donovan Sr. and wife, Shari of South Carolina. He will also be greatly missed by his niece and nephew Michael Jr. and Alison Donovan, as well as nieces and nephews in Florida, David, Deanna and Paul Donovan and their spouses and children. He is also survived by his lifelong friend Noreen Bahring and her daughter Juliana Bahring. His beloved sister, Kathleen Donovan predeceased him.

John’s successful career began at the Southern New England Telephone Company, spanning twenty years, as the first male telephone operator and naturally flourishing into a management position. During that period, John also worked part time at New Haven’s Colony Inn and put himself through school, graduating in 1993 from Albertus Magnus College with a Bachelor’s Degree in Communications.

His educational success was followed by a move to the big city, Boston, a place he quickly called home and made his name known. His career there began in real estate and he found his calling in leasing and marketing. John worked for Longwood Towers, AvalonBay (Prudential Center) and spent the last fourteen years of his accomplished career at the Devonshire as the Director of Leasing and Marketing. John’s hard work and attention to detail not only was reflected in his career, but also in his constant giving back to others in the communities in which he lived, including being a Board Member of STEP Inc. in Boston, a drug and alcohol rehabilitation program near and dear to his heart. John was unlike anyone you could have met, his grace and class intertwined with a witty and expressive character.

He was “Mr. Entertainment”, a lover of holidays – Christmas especially, and was always onto his next adventure or weekend getaway. John lived life to the fullest, traveling up until the very last day his body would allow, his zest for life left a mark on all of us. He will be truly missed by family and an extensive group of friends.

Family and friends are invited to attend a Funeral Mass to be held at St. Peter the Apostle Church, 11 Prince St. Provincetown, Saturday June, 15th at 11:00 am. Burial will be at St Lawrence Cemetery in New Haven.

If desired, donations in John’s name may be made to the Dana Farber Cancer Institute, 450 Brookline Ave, Boston, MA 02215.