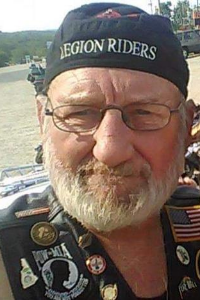 BELMONT-----We would like to announce the passing of our precious father, William Thomas Romprey, 71, of 77 Hoadley Road, Belmont, NH. He left us surrounded by his children on Sunday, June 2, 2019, due to complications from a recent illness.

Wild Bill, as he was known, came into this world on March 11, 1948, the son of Thomas Adrian Romprey and Vera Ilene Horne, and siblings Cheryl Romprey Rose and Jeannette Romprey. He attended school and was brought up in Belmont, NH, where his lifelong love of auto racing began. He was a mechanic in both Belmont and Laconia for over 50 years and was passionate about NASCAR, playing pool, camping at Bentleys and Sugar Shack, boating (got gas?) and rides with friends on his Harley (again, got gas?). He was even more passionate about his vodka, Sambuca, and smoke. He loved visiting different race tracks across the country (adventures as he called them, others would disagree) and his name lives forever on a brick at the entrance to the NASCAR hall of fame. He raced for many years at Bryar’s Motorsport Park, Lee USA Speedway, and other tracks throughout New England. He was very proud to be a member of the Racing History Preservation Group at New Hampshire Motor Speedway.

He was a 50-year member of the Laconia Lodge of Elks, the Sons of the Tilton American Legion, Laconia VFW Auxiliary, the American Legion Riders Chapter 7 Rochester, and the Laconia Rod & Gun Club. He was also a member the Lakes Region Pool League and the Tuesday night BCA pool league, where he realized that practice doesn’t always make you perfect, though he tried like hell. And he loved his Wednesday night cribbage at the Elks.

He leaves behind his sister Cheryl Romprey Rose, five daughters Sundae Romprey of Laconia, Tammy Caveney and her husband William, of Canterbury, Ashley Merchant of Manchester, Crystal Mansur and her husband Harley, of Laconia, and Brandy Sasseville and her husband Skip of Gilford and a son, Jason Romprey and his wife Carrie of Laconia. He also leaves behind grandchildren Calvin Freer, Graham Freer, Chloe Willyam Romprey, Kaitlyn Sasseville, Nick Sasseville, Ryan Sasseville, Jade Sawyer, Dalton Sawyer, Morgan Lee Romprey, and Kaylee Paula Romprey. He had a very large family and is leaving behind many cousins, aunts, uncles, nieces and nephews.

Bill’s final ride will be leaving Wilkinson-Beane-Simoneau-Paquette Funeral Home, 164 Pleasant St, Laconia, at Noontime on Sunday, June 9, 2019, for a ride through the Weirs. His final big party will be held at Laconia VFW on Court St, at 1:00 p.m., following the ride. Let’s all give him the send-off that he wanted.

Wild Bill lived life his way and had way too much fun doing it. He left this world just as he came in, sliding sideways, drink in one hand, smoke in the other, cowboy hat on his head, and screaming BAM, BAM, BAM.