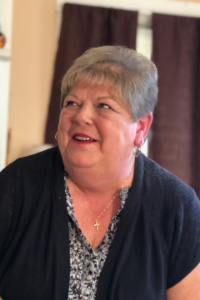 Belmont— On May 28, 2019 Debra A Fralick of Sargent Street Belmont lost her 2 year battle with Metastatic Lung Cancer.

Debbie was born on January 18, 1952 in Cambridge, MA the daughter of Joseph and Gertrude (Murray) Stevens. Debbie worked for many years in the sales department of Sam’s Club, where she enjoyed working with her fellow associates and Sam’s Club Members. Debbie also graduated from Empire Beauty School, where over time she became an Instructor for many years. Debbie was an avid New England sports fan especially the Boston Red Sox, she enjoyed baking, attending concerts, and listening to country music. Above all she loved camping trips at Ammonoosuc Campground and time spent with her family.

Debbie is survived by her mother, Gertrude (Murray) Stevens; her husband of 33years, William Fralick, two sons, Joel Christy and Thomas Fralick; her daughter, Cori Bresse; six grandchildren, Kyle, Mason, Bree, Xander, Xyler, and Liam; her brother, Larry Stevens; and her sister, Maria Babineau. In addition to her father she is predeceased by her brother Joseph Stevens II.

The Family would like to thank the Nurses and Doctors from LRGH, Dana-Farber Cancer Institute, Elliott Hospital and Brigham & Woman’s Hospital for the continued support and the excellent care that was given throughout her battle.

Calling hours will be held on Sunday, June 2, 2019 from 11:00am - 1:00pm at the Wilkinson-Beane-Simoneau-Paquette Funeral Home, 164 Pleasant Street, Laconia, NH using the Carriage House entrance.

For those who wish the family suggests memorial contributions be made to the Dana-Farber Cancer Institute in Boston to support on-going Cancer research.

Wilkinson-Beane-Simoneau-Paquette Funeral Home & Cremation Services, 164 Pleasant Street, Laconia NH is assisting the family with the arrangements. For more information and to view an online memorial go to www.wilkinsonbeane.com