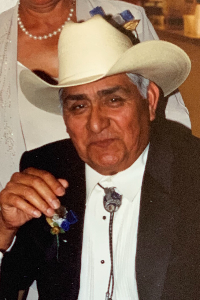 Virgilio Azua Cruz, 80, of Prosser, passed away on May 30, 2019 at Kadlec Regional Medical Center.

He was born on May 3, 1939 in Ciudad Victoria, Mexico to Gumercindo and Paula (Azua) Cruz. He was raised in a border town and received his education in the United States. Virgilio married Alifonza Martinez on September 22, 1961 in McMinnville, Oregon. The couple made their home in Prosser in 1971 where they raised their family. Virgilio worked for Twin City Foods for thirty-three years retiring in 2000. He was a devoted husband, father and grandfather and loved spending time with his family. He enjoyed gardening, trips to Lincoln City, listening to vinyl records and especially loved Elvis and Pedro Infante. He also enjoyed casino trips, boxing and watching old movies.

He is survived by his wife of fifty-seven years, Alifonza Cruz of Prosser; his children, Rudy (Yolanda) Cruz of Sunnyside, Nora (Arturo) Ramos of Prosser, Freddie (Rosa) Cruz of Pasco, Patty (Jaime) Torres of Pasco and Joey Cruz (Amy) of Prosser; fourteen grandchildren and ten great-grandchildren. He is also survived by two brothers, Robert Cruz of Grandview and David (Dome) Cruz of Coachella, CA; two sisters, Mary (Pedro) Mariscal of Grandview and Hilda Herrera of Yakima; and several nieces and nephews. He was preceded in death by his parents; brothers, Rosendo, Ceasar and Guillermo Cruz.

Funeral services will be held at 11:00 am on Monday, June 3rd at Prosser Funeral Home. The services will conclude in the chapel. You may leave a message for the family at www.prosserfuneralhome.com