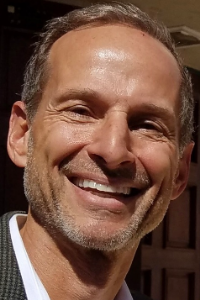 Tim Rueth, age 58, died May 14, 2019, at Cottage Hospital in Santa Barbara as a result of injuries suffered in a fall at his home in Ojai.
He was born June 20, 1960, in Jefferson, Wisconsin, and was a resident of California for thirty years, and of Ojai for less than a year.
Tim was a private investor/advisor/consultant to high-tech start-up companies, entrepreneurs and universities, with expertise in technology commercialization, general start-up coaching, and investment. Early in his career Tim was employed by Qualcomm where he was one of the original designers of the world’s first CDMA chip-set.
Tim enjoyed his family, running marathons, and becoming an Ojai backyard citrus grower.
He was preceded in death by his parents, Cyril and Adeline Rueth.
Tim is survived by his wife Ellen Perrett Rueth, his two sons Christopher and Jeremy, three stepchildren, Michael, Rachel, and Megan Wayne, and by his four brothers, Dan and wife Wendy, Joe and wife Barb, Jim, and Mike Rueth.
Family and friends are invited to a Mass of Christian Burial to celebrate Tim's life to be celebrated at 11am Monday May 20, 2019 in St. Thomas Aquinas Roman Catholic Church, 185 St. Thomas Drive Ojai. A Most Holy Rosary will precede Mass at 10:30a.m. No flowers, please. Arrangements are under the direction of the JOSEPH P. REARDON FUNERAL HOME & CREMATION SERVICE, Ventura.