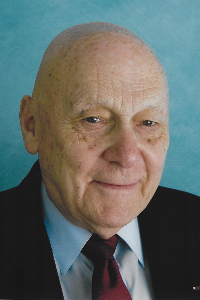 Stellar athlete. Decorated World War II veteran. Successful businessman. Distinguished public servant. Recipient of two Sagamore of the Wabash awards from Indiana governors. But most of all, dedicated and loving husband, father, grandfather, great grandfather and friend. All this and more describes the life and accomplishments of Gilbert Eugene “Gene” Yates of Anderson, IN, who passed from this life on April 10, 2019 at the age of 97.
A lifelong resident of Anderson, Gene was born on Jan. 12, 1922, to James Claude and Amelia Bujarsky Yates. He was a graduate of Anderson High School, where he was a member of the 1940 Indiana Basketball All-Star Team as well as a four-time state champion in the half-mile (880 yards) run. Yates was recruited by The Ohio State University, where he was a member of the Big Ten champion indoor and outdoor track teams in 1942 and a member of Sigma Chi fraternity.
He married the love of his life, Dorothy “Dottie” Kiphart Yates on Jan. 28, 1944, the beginning of a 63-year union that ended with Dottie’s passing in May of 2002. They had three children who survive, Robbie (Lewis) Kestner of St. Charles, Mo., Susan (Jon) Wampler of San Antonio, Tx., and John (Carol) Yates of Marietta, Ga., along with eight grandchildren and eight great grandchildren.
Yates’ college career was interrupted by World War II, where he proudly and bravely served in the parachute infantry of the 11th Airborne Division in the Pacific Theatre, earning a Purple Heart and a Bronze Star for bravery.
Post-war, Yates completed his degree in Business Administration from Ohio State, returned to Indiana and eventually to his hometown of Anderson, where he began an exceptional business career in which he would serve as chairman, director and president of First Savings & Loan Association until his retirement in 1987. He also earned a graduate degree in savings and loans administration from the Indiana University School of Business.
During that time, Governor Otis R. Bowen appointed Yates to the Indiana Department of Financial Institutions. Yates championed reforms that made the IDFI more inclusive of savings and loan institutions. Later, under Governor Robert Orr, Yates was instrumental in making Indiana financial institutions compliant with nationwide auditing and compliance standards. It was these efforts that earned him the two coveted Sagamore Awards.
In a volunteer capacity, Yates gave of his time and intellect to serve the Anderson Center for the Arts, the Savings Institutions Marketing Society of America, the Indiana League of Savings Institutions, Junior Achievement, the Anderson Chamber of Commerce, Community Hospital, the Madison County Heart Association, the Madison County Arts Council, the Madison County Emergency Management Council, the Madison County Scottish Rite, the Madison County Historical Society, the City of Anderson Plan Commission, the Visiting Nurses Association and the Service Corp of Retired Executives.
He also was a long-time member of the First United Methodist Church.
An avid photographer and birder, he combined those pursuits to document more than 500 species. He was also an outstanding ballroom dancer.
A man who once lost a shoe but nonetheless completed a championship race running barefoot on a cinder track, Yates was tough, talented, passionate and dedicated, as well as charming and possessing of a hearty laugh and a terrific sense of humor. He carried those traits with him until his final days.
Gene Yates lived a full and rich life. He made his family, his community, his state and his country better.
In lieu of flowers, please make a donation to The Indiana Audubon Society or Mary Gray Bird Sanctuary; 3499 S. Bird Sanctuary Road; Connorsville, Indiana 47331
A Memorial Service will be held at 4:00 PM on Friday, May 3, 2019 at Love Events, 1803 Broadway, Anderson, Indiana, with Rev. Corinne Boruff officiating. Military honors will be conducted at the beginning of the Memorial Service. A reception until 6PM will immediately follow.
The visitation will be on Friday, May 3, 2019 from 3-4PM at Love Events.
Please post online condolences at www.rozelle-johnson.com.