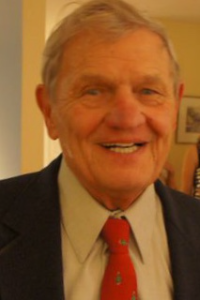 “Big Steve” was a proud American veteran having served in the army during WWII. He was later an active member of the Am Vets and American Legion. After the war, Steve married the love of his life “His Bride” Wanda, and raised a large and loving family. He started a successful insurance business in West Roxbury which he ran for many years before retiring happily to Falmouth. “Grampy” loved nothing more than spending time at the beach or the grill with his family. He was a prolific singer and story teller with a warm smile and ever-ready helping hand. Steve was a devout Catholic who passed from this earth shortly after spending Easter Sunday brunch surrounded by many members of his family at the Rogerson House in Jamaica Plain.

Funeral from The Robert J. Lawler & Crosby Funeral, 1803 Centre St. West Roxbury on Thursday April 25, at 9:00 am. A Mass of Christian Burial will be celebrated in St. John Chrysostom Church, 4750 Washington St. West Roxbury at 10:00 am. Relatives and friends are invited to attend.

Interment with military honors in The Massachusetts National Cemetery, Bourne at 1:30 pm.

In lieu of flowers, donations can be made in Steve’s memory to Rogerson Communities, One Florence Street, Roslindale, MA 02131, Web: rogerson.org.