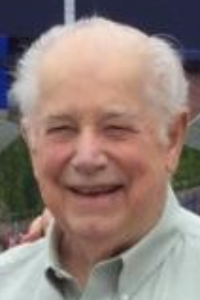 FRAMINGHAM: Robert B. Santone, 88, died peacefully and comfortably surrounded by his devoted and loving family on Tuesday, April 16, 2019 following a period of declining health.
He was born in Chicago, Illinois the son of the late Urbano Santone and Mary Christina (O’Keefe) Santone.
He was the husband of the late Jean Mary (Erickson) Santone who died on February 4, 1996 and was the father of the late John Michael Santone.
Robert is survived by his loving children, Susane M. Santone of Framingham and Robert B. Santone, II of Marlborough. He was the brother of Urban Santone and his wife Nona of Millwood, NY. Uncle of Sharon; Donna (Herman), Greg (Cheri) and Steven. He is also survived by his best friend Ann Rutter of Hopkinton. He was known as “Grand Bob” to Ann’s grandchildren; Meaghan, Genevieve, Joshua, John, Jeffrey, Jack, Kiley and Thomas.
Bob has been a resident of Framingham for over 54 years and previously resided in Wayland Pleasantville, NY and Scarsdale, NY. He received his BS in Engineering from the University of Rochester. Bob had a long and distinguished career in the Missile Systems Division of Raytheon as a Value and Mechanical Engineer before retiring.
Since he was a young boy, he has been actively involved in the Boy Scouts of America, not only as a Cub Scout, Boy Scout, Eagle Scout and as a Leader. He participated with the Boy Scouts well into his mid 70’s lending guidance to many boys over the years.
He was a member of the Framingham Historical Society. He was also a historian for Saint Anselm’s Church and wrote a book on the many stained glass windows and artifacts at the church. He was an active communicant of Saint Anselm’s Church and served in the buildings and grounds committee. He was one of the many parishioners who held 24 hour 7 days a week vigil at the church to discourage the closing by the Archdiocese. He will be remembered fondly by his neighbors as the official Mayor of Overlook Drive East. One of his favorite pastimes was family genealogy.
Bob was a kind and gentle man who was always ready to lend a hand to anyone in need. He will be fondly remembered and loved by all who knew him.
Visitations will be held on Friday, April 26, 2019 from 4:00 to 7:00 pm at the John C. Bryant Funeral Home, 56 Pemberton Road (off Rte. 30), Wayland.
On Saturday, April 27, 2019 at 9:30 am, family and friends are invited to go directly to Saint Anselm Church, 100 Landham Road, Sudbury for his Mass of Christian Burial.
Interment will follow in the Santone family lot in Lakeview Cemetery in Wayland.
In lieu of flowers, his family kindly suggests that memorial gifts in Bob’s memory may be sent to Saint Anselm Church for the expansion of the Meditation Path.