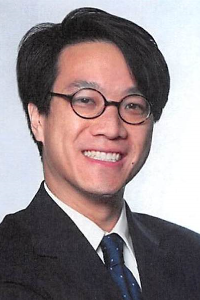 
Jonathan Leong, MD, PhD was born and raised in Lincoln, MA. Since childhood, Jonathan was a virtuoso violinist performing locally, nationally (including Carnegie Hall) and internationally. He attended Milton Academy where he received the A. Harold Abell Prize recognizing exceptional musical ability. Jonathan then attended Harvard College, where he performed as a chamber musician and excelled as a scientist and scholar, earning junior year induction into the Phi Beta Kappa national honor society. He graduated Summa Cum Laude with a double major in Mathematics and Biology and a citation in German. Jonathan made the decision to focus his career on science rather than music and spent two formative years after college as a Fulbright Scholar working in Max Planck Institute of Neurobiology in Martinstried, Germany where he pursued laboratory science focusing on the visual cortex of the ferrets under Dr. Tobias Bonhoeffer. Upon his return to the US, Jonathan matriculated into the Medical Scientist Training Program at Stanford University School of Medicine.

At Stanford, Jonathan was an exceptionally gifted physician-scientist, completing his PhD thesis studies in Dr. Thomas Clandinin’s neuroscience laboratory, where he made fundamental contributions to our understanding of how the brain detects visual motion. In 2017, Jonathan matched into a preliminary internal medicine internship at Brigham and Women’s Hospital followed by radiology residency at the Massachusetts General Hospital. While Match Day is usually one of the most joyful days for medical students, Match Day was the same day Jonathan and his family learned of his devastating diagnosis of glioblastoma. He successfully defended his PhD thesis by teleconference from his living room in Lincoln while recovering from surgery, earning MD and PhD degrees from Stanford in June 2017.

While many people in his shoes would have travelled the world with the time they had left, Jonathan chose instead to continue to pursue his physician scientist dream, beginning as an internal medicine intern at the Brigham, while managing chemotherapy and other treatments. His mother Susanna shared that, at one of Jonathan’s chemotherapy visits, another patient recognized him in the waiting room as an intern who had cared for his father, and thanked him for saving his father’s life. Jonathan’s selfless choice to pursue residency to help others made a difference.

Many Stanford classmates from around the country, as well as house staff and faculty from Brigham and MGH visited Jonathan at his apartment in Cambridge regularly as his health declined, including celebrating his 36th birthday with him on February 9, 2019. Jonathan passed away on April 10, 2019, surrounded by his family. Jonathan is survived by his adoring parents -- Susanna Szeto, a former mathematics teacher in the Newton Public Schools and Joseph Leong, a retired nuclear scientist in the MGH Department of Radiation Oncology. He also left behind a maternal grandmother Lily Tang Szeto of Hong Kong, many aunts, uncles and cousins overseas. He had in particular a very close relationship with his Aunt Daisy Wapler, his cousins Fai and Min Wapler of Cologne, Germany and his “uncle” Chee Yee Chong of Los Altos, California.

Jonathan will not only be remembered for his accomplishments in music and science, he will be missed by the many who loved him because of his generous personality, his distinguished laughs, his sense of humor, and his kindness to all. Jonathan was a big presence in every group of which he was a part. He left this world with his good name, his “Shem Tov” in full display.

In lieu of flowers, please consider a memorial donation to the Jonathan Leong Memorial Fund to support research and education in the field of neuroscience. You may go online (https://makeagift.stanford.edu) or make a check payable to “Stanford University” and send the check to: Stanford University Development Services, P.O. Box 20466, Stanford, CA 94309-0466. Please note online or on the memo line of the check: Please NOTE online or on the check
“Jonathan Leong Memorial Fund”

It would be helpful if you could email Susanna (Szetosky@gmail.com) of your thoughtful donation so she would have the opportunity to assure that it is being directed to the designated fund at Stanford University. Thank you for your support!