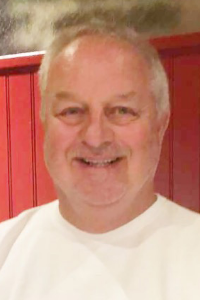 Steven E. Young, 65, of New Bedford passed away suddenly on Sunday February 24, 2019 at St. Luke’s Hospital. He was the loving husband and best friend of Judy Pacheco-Young with whom he shared 32 years together.

Steve was formerly employed as a truck driver for Nabisco, and later as a Lieutenant with the Bristol County Sheriff’s Office until his retirement.

His passion in life, after his family, was his classic cars, including two Shelby Mustangs and a ’76 Corvette. He was an avid New England Patriots fan. He was known as the go-to guy in his neighborhood if anyone needed assistance; he spent his last few moments doing this. He enjoyed meeting his friends at Correia’s Garage, and his visits to Harbor Freight followed by lunch at Faneek’s. Steve loved music, especially the Beatles, although he could never get the words to the songs quite right. A few short paragraphs can never describe Steve, his love for life and his infectious laugh. He will be missed deeply by all who had the pleasure of knowing him.

He is survived by his wife Judy; his daughters, Jesseca and Megan Young of New Bedford and his dog and loyal companion, Shammie; his sister, Carole MacLean and her husband Joseph of Freetown; his step brother Kevin Young of California; his mother-in-law, Hazel Pacheco of New Bedford; and two nieces, Amy Correia and Ann Quaintance.

He was the son-in-law of the late Carlos Pacheco.

His Funeral will be held on Friday March 1, 2019 at 8 AM from the Saunders-Dwyer Home for Funerals, 495 Park St., New Bedford, followed by his Funeral Mass at St. Lawrence Church at 9 AM. Burial will be in Rural Cemetery. Visiting hours will be on Thursday February 28th from 3-7 PM. The family respectfully asks that friends wear their favorite Patriots gear or Patriots colors to the wake/funeral. In lieu of flowers, remembrances may be made to the Joslin Diabetes Center, 1 Joslin Place, Suite 745, Boston, MA 02215 (www.joslin.org/donate) or the American Heart Association, 7272 Greenville Avenue, Dallas, TX 75231. For directions and guestbook, please visit www.saundersdwyer.com.