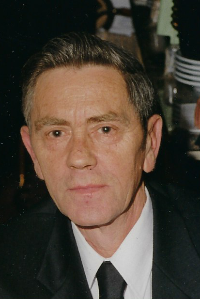 Charles R. Studebaker, Sr. age 80, of Canton passed away February 16th at home surrounded by his loving family. Born in Olney, MD he was raised and educated in Frederick County Maryland. After leaving high school in 1957, he enlisted in the Navy with the intent on fulfilling his promise to himself of charting a different course for his life. For the next four years he was a crew member on the U.S.S. Barry (DD-933), based in Newport, R.I., touring from port to port throughout the Mediterranean. He worked on the Barry’s propulsion system, fueling his interest in engineering. He then moved to Canton and attended various engineering schools, including Peterson Steam Engineering in Boston, which prepared him for the state license exams in steam engineering. He previously worked for Allied Container in Dedham, Texas Instruments in N. Attleboro, Bird & Son Paper Mill in E. Walpole, before being offered a job at M.I.T. where he started as assistant chief engineer and two years later became chief engineer. He stayed at M.I.T. until he “officially” retired in 2001. Even after retiring, he stayed on as a Consultant at M.I.T. for several years. He loved the Red Sox and never missed watching a game. Charles was a member of AMVETS since 1983 and was the commander at Randolph Post 51 before becoming involved in statewide matters and was elected AMVETS Department Commander from 2012-2013. As State Commander, Studebaker oversaw the 45 posts in the Commonwealth and their 1,200 members.
Beloved husband of the love of his life, the late Beverly A. (Sacco). Loving father of Donna M. Nashawaty and her husband Frederick of Bristol, NH, Charles R. Studebaker, Jr. of Stoughton, Sharon L. Johnson and her husband TJ of Canton, David A. Studebaker of Canton, and Sandra J. Studebaker of Medfield. Son of the late Charles E. and Pauline Studebaker. Brother of Alberta Johnson, Richard Oden, Bonnie Boone, Donald Oden, Cynthia Spradlin, John Lawson and the late Carla E. Dick, Buster Studebaker and Gene Goodsell. Son in law of Beatrice Sacco Draper of Canton. Brother in law of Donald Sacco of Canton and Paul Sacco of AZ. He was the loving and adoring grandfather to 15 grandchildren, 11 great grandchildren and 1 great great grandson and he leaves behind his adored German Shepherd “Max”. Visiting hours at the Dockray & Thomas Funeral Home 455 Washington St. Canton Friday 4-8 pm. Funeral Mass at St. John the Evangelist Church Canton Saturday morning February 23rd at 11:30. Burial Canton Corner Cemetery. Donations may be made in his memory to Danna Farber Cancer Institute 450 Brookline Ave Boston, MA 02215