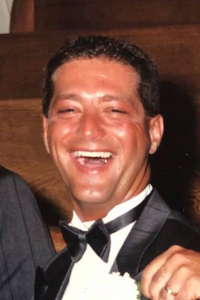 With great sadness we announce the passing of Charles Michael Merrill on February 9, 2019. Michael was the proud son of Barbara Merrill and the late Richard B. Merrill Sr. whom along with his nine brothers and sisters he has helped care for most of his adult life.

Michael is a lifelong Salisbury resident and was a member of the Parish of the Star of the Sea church. A Triton High School Graduate, Michael was a multi-sport athlete playing wide receiver for the Triton football team and was also a member of the Triton Basketball team.

Michael’s happiest times were with his family. His laugh, quick wit, and smile were welcoming and infectious to all who came to know him through his families many gatherings and events. Michael was the life of the party, and could be seen dancing at every family Christmas party surrounded by those he loved most his many beloved family members.

Michael was also an avid Boston sports fan and would regularly attend the sporting events of his many cherished nieces and nephews.

In addition to his Mother Barbara Merrill whom Michael was so close, Michael is survived by his son, Charles Michael Merrill Jr ; his siblings, Linda and Dan Mcneil, Richard B. Merrill Jr and Theresa Merrill, Michelle and David Freeman, Jeffrey Merrill and Keith Beardsley, Rhonda Griffin, Jeannie and Carl Martin, Mabel and Kevin Lewis, and Chad and Deanna Merrill. Michael will be sorely missed by his many nieces and nephews. He is preceded in death by his Father and Best Friend Richard B. Merrill Sr, his Sister Wendy Merrill, and his Brother in-Law Patrick Griffin.

Services will be on Thursday February 14, 2019 at the star of the sea church, Salisbury, MA.

Calling hours will be from 09:30am-10:30am with a service immediately following.