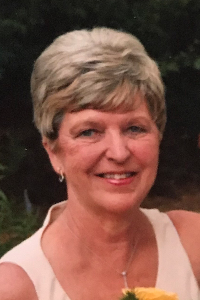 …”The Rosary Lady”
TEWKSBURY – Mrs. Pauline Marie (Elie) Barbieri, age 80, known to many as “the rosary lady," passed peacefully in her sleep on February 5, 2019, surrounded by her family after a long courageous battle with end stage kidney disease.
She was born in Lowell on July 4, 1938, one of three children of the late Gerard and Antoinette (Proteau) Elie. She grew up in Lowell where she met Bernie, her teenage sweetheart, married and lived a love story like no other. They celebrated their 61st wedding anniversary this past July fourth.
They bought their first home in Lowell and later moved to Rogers Street in Tewksbury where they raised their family from 1964 until 2014.
Some of Pauline’s favorite joys in life were gathering with her family on the Fourth of July, traveling across country with Bernie in their motorhome, and playing the penny slots at Foxwoods. She loved having cocktails by the pool, weekly dinners at the Piccadilly Pub, gardening in the back yard, and she enjoyed the occasional visit to the ocean when she needed to clear her mind.
Pauline enjoyed many things but none more than her family. Besides her husband, she leaves four children, Joseph G. Barbieri and his wife Valerie (Britt) of Chelmsford, and their children, Andrea (Barbieri) Tiberio and her husband James, Joseph, and Jeanna; Debra (Barbieri) Hutcheson and her husband John of Nashua, NH, and her son, Joseph “Jo-Joe” Doucette; Paula (Barbieri) Stewart and her husband Michael of Tewksbury, and their children, Tyler, and his wife Amanda, Kyle, Breanna (Stewart) McDermott, and her husband Michael, and Emily; Melissa Barbieri and her wife, Elizabeth “Liz” (Murray) of Dracut, and their children, Brennan and Leo; a great grandson, Cameron James Tiberio. Her sister, Theresa Goyette and her husband Edward of Lowell, and many nieces and nephews. She is also predeceased by her brother Roger Elie.
Visiting hours are Thursday, 4:00 p.m. until 8:00 p.m. at the Tewksbury Funeral Home, corner of 1 Dewey and 975 Main St. (Rte. 38) TEWKSBURY CENTER, Ph. (800 in MA or 978) 851 2950. Her funeral will begin Friday at 10:00 a.m. from the funeral home, followed by a Funeral Mass at 11:00 am at St. Robert’s Bellarmine Church, 198 Haggetts Pond Rd. W. Andover. Burial will be at St. Mary Cemetery, No. Tewksbury. Donations in Pauline’s name can be made to Boston Children’s Hospital, 410 Park Drive, Suite 602, Boston, MA 02215-3354 or by visiting Bostonchildrens.org/givenow see: tewksburyfuneralhome.com