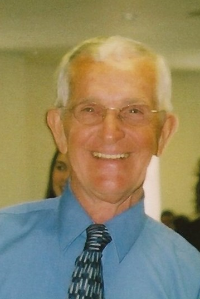 Whitman – James E. Howe, 84 a longtime resident of Whitman, died surrounded by his loving family on Monday February 4. He was the devoted husband of sixty-four years to Eleanor “Ellie” (Boudreau) Howe.

Born in Middleboro he was the son of the late Francis Howe and Eleanor (Lang) Quinn.

Jim had started his work career as a welder for Litecontrol, formally known as Wheel & Reflector, and retired just shy of eighty years old as a supervisor for the company.

He loved camping, boating, going to car shows and was an avid New England Patriots fan. He also enjoyed yardwork and gardening and his work was reflected in his attractive Whitman home.

He was a longtime and devoted communicant of the Holy Ghost Parish in Whitman.

In addition to his wife Eleanor he is survived by his children Peggy Pigeon and her husband David of Bridgewater, Debbie Ford and her husband George of Halifax, Timothy Howe of Wallingford, CT, Peter Howe and his wife Annette of Halifax and Scott Howe and his wife Laura of Whitman and his sister Carol O’Brien of Whitman. He is also survived by many grandchildren, great grandchildren, nieces and nephews. He will be missed by his beloved dog “Mitzi”.

His services will be held Saturday February 16 at 8:15 AM from the Blanchard Funeral Chapel, Plymouth Street (Rte.58 @ the rotary) Whitman, followed by a funeral Mass at 9:00 AM in the Holy Ghost Church, Whitman. Burial will follow in St. James Cemetery. Visiting hours will be Friday February 15 from 4:00-8:00 PM.