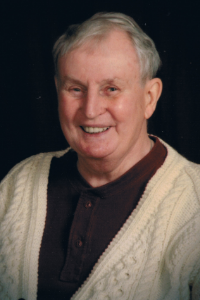 A funeral mass will be held at 10:00 am on Tuesday, February 19, 2019 at St. Teresa of Avila Catholic Church with Reverend Michael Roverse officiating.
The family will receive friends at the church prior to the service.

Mr. Quinn was born in 1940 in Cleveland, Ohio where he attended St. Ignatius High School and enlisted in the US Navy. After his service was completed, he married his life-long partner, Carol Kindler Quinn, and the two of them moved to Chicago where he attended Loyola University, earning a Bachelor of Business degree. Within the span of 10 years, he and Carol had five children while he finished school and began his career in manufacturing – first with Union Tank Car Company and later moving to Zenith Television. He enjoyed many opportunities for advancement and saw each as a new adventure for the family, moving his young family several times between Illinois, Texas and later Massachusetts and New York. Ultimately the family settled in Amsterdam, NY, where he started his second career as a child protective officer and probation officer for Montgomery County. During his years in Amsterdam, he served the community through his church and as President of the Affordable Housing Board. Additionally, he was a member and long-time President of the city’s Irish-American Club. Mr. Quinn spent many happy weekends and St. Patrick’s Days in the company of the good friends he made at “the club.”

After retiring from Montgomery County, Mr. and Mrs. Quinn moved to Martinez, GA where they have lived for the past 12 years. They joined the St. Teresa of Avila Church, where he was active in Knights of Columbus and various ministries. They enjoyed traveling together, especially visits with their children and grandchildren and their trips to Savannah and Myrtle Beach.

In addition to his wife of 52 years, he is survived by their children; Colleen Sawyer (Robert), Alex J. Quinn, Margaret Schirm (Jeff), Elizabeth Peterson (Ben) and Kathleen Phillips (David), as well as his 13 grandchildren. He was preceded in death by his parents; Alex and Mary Quinn, a sister; Mary Morales and a brother; Bishop A. James Quinn.

In lieu of flowers, the family requests that donations be made to Zero Cancer at www.zerocancer.org.

Please sign the guestbook and send condolences at www.plattsfuneralhome.com.