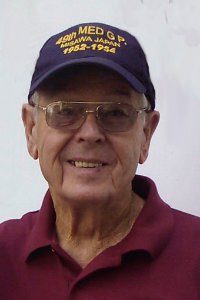 Richard served his country from 1951 – 1955 as an Airman 1st Class in the United States Air Force. He was a Medic stationed in Misawa, Japan during the Korean War. Richard worked as an electrician with Public Service Electric and Gas in New Jersey for many years until starting his own business as an antique collector. He was very knowledgeable about all types of antiques but had a real passion for antique clocks and amassed a collection that was museum worthy. Richard loved boating, fishing, traveling, refinishing antiques, repairing clocks and spending time with his family and friends.

Richard was well loved by all who knew him and will be missed by his children; Lyn, Bill and his wife Kate, Wendy and her husband, Jay. He was predeceased by his sister, Joan Fuentes of Edison, New Jersey and has a sister Gladys Weidemann of St. Petersburg, Florida and a sister Sandy Dudas of Oceanside, California. Richard “Pop Pop” loved his 3 grandchildren very much; Hannah D’Oliveira Kertesz of Jupiter, FL, John Denison Nevin and Julius Richard Nevin of Andover, MA. He also had several nephews, nieces and cousins and truly loved gathering together with his family. His life was a blessing to all and the knowledge that he is forever reunited with his beloved wife Dorie can be a comfort to everyone.