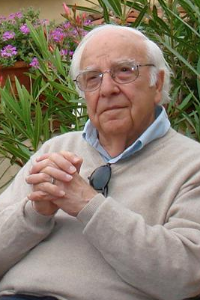 Artist, lifelong educator and all around renaissance man passed quietly at home on his 95th birthday. Professor Emeritus at Rhode Island College where he taught for over 35 years, he is survived by his two sons John and David, their wives Pam and Jeanne and five grand children, John, Emma, Jillian, Samantha and Alison. A much loved and admired father, grand father and teacher he was also a dear friend to many.

John E DeMelim Jr. was born and raised in Somerville MA. A World War II veteran and survivor of the Bombing of London, he returned home to attend college on the GI Bill. A Honeymoon in Bermuda in 1952 marked the beginning of a 60 year marriage and was the spark that began a life long love of travel and fascination with other cultures and peoples of the world. Together with his wife Mary, they pioneered “off the map” vacationing before the maps were even available. Their travels have taken them to many of the worlds top tourist attractions, but their real interest was in the places less traveled. Always in the planning stages of the next trip, the list of places not explored is shorter than the list of locations they were able to visit and explore together. Each trip brought back new friends and new stories. In addition to new friends John always returned with a renewed energy and a diverse collection of images, objects and material to inform or incorporate into his next body of artwork.

A Graduate of Tufts and the School of the Museum of Fine Arts, otherwise know as the Boston Museum School John went on to become a prolific artist, creating and constantly innovating in a practice that spanned ten decades. A student of Umberto Romano and Karl Zerbe, he moved to Rhode Island in 1960 to join the faculty at Rhode Island College as they opened their brand new campus in North Providence. As one of the first faculty members he quickly became everyone’s favorite professor, often for teaching Art in Society, a course required of all students for graduation. Teaching a wide array of foundation courses he went on to teach printmaking and later started the Graphic Design program at Rhode Island College. He grew and reinvented himself as the program grew, worked tirelessly to secure the national accreditation for the growing Art Department and went back to school several times to update his skills. Studying computers at MassArt led to his introducing computers to the graphic design program at RIC in 1984.

A lifetime member of the Providence Art Club, he continued his personal practice long after retiring, working in his studio everyday and had his most recent exhibition at the Rhode Island Center for Photographic Arts in Providence in September.

He was a wonderful, talented and kind gentleman who will be missed by all who knew him.


His funeral will be held Friday, February 8th at 8:30am from the Anderson-Winfield Funeral Home, Rt 44 at Greenville Common, Greenville, RI. Mass of Christian Burial will be at 9:30 in St. Philip Church, 622 Putnam Avenue, Greenville. Burial with military honors will follow in RI Veteran's Cemetery, Exeter. Visitation will be Thursday evening, 4-7pm. In lieu of flowers donations can be made to the Graphic Design Department at Rhode Island College in the name of John DeMelim.