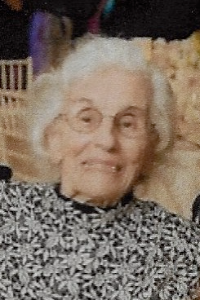 Mary Vivian Beatrice (Allaire) Unger, 96, known as Vivian, a resident of Mansfield, MA for 72 years, passed peacefully at Madonna Manor in North Attleborough on January 31, 2019. Affectionately referred to as 'Mimi' by many, she was the widow of John D. Unger, Jr., who pre-deceased her on October 24, 2002. Vivian and John were happily wed for sixty-two years at the time of his passing.


Mimi was born on September 17, 1922 in Woonsocket, Massachusetts, one of nine children of Darius and Emma (Lavallee) Allaire. Her siblings, most of whom pre-deceased her, were Rita DiLibero, Alice MacDougall Lucien Allaire, Stephen, Darius, Arthur, and Lucille Allaire. She is survived by her brother Charles Allaire.


She married the love of her life, John Unger, Jr. on March 9, 1941 and they spent their life together blissfully raising four daughters. John often lovingly reminded her she was 'all he ever needed' in life when he left for work each day. Their devotion to each other was unwavering.


She attended Bellingham public schools and was an RN, graduating from the Massasoit School of Nursing in 1970. She was inducted into the Green Key Society, the highest honorific at Massasoit College, bestowed for academic excellence and leadership. Mimi was never far from the nursing field and caring for those in need. She was the consummate caretaker. She ended her professional career assisting hospice patients through their most difficult times.


Mimi was in her glory when hosting large family gatherings in her home on Dean Street in Mansfield, especially at Thanksgiving. The house would burst at the seams with family and friends, replete with an abundance of food, and capped off with performances by grandchildren. Most in attendance went home with day’s worth of leftovers.


A communicant of St. Mary's Church in Mansfield, she and John were regulars at the parish they helped to support. Vivian was also a devoted member of St. Mary’s Catholic Women’s Club.


She is survived by her loving daughters Gail E. McElroy (husband, Robert) of Raynham, Susan J. Rafferty of Swansea, and Vivienne Steinbock and her fiancé Michael Mendelsohn of Rockport. Her daughter Karen L. Compton of Mansfield predeceased her on November 13, 2017.


In addition to her children, Mimi is survived by her 12 devoted grandchildren: Robert
McElroy, Jr. and his wife Lynn of Raynham, MA, William McElroy and his wife Barbara of Berkley, MA; Sean Compton and his Tracy of North Attleborough, Amy McCue and her husband Michael of Mansfield, MA, Elizabeth Rafferty of Fall River, MA, Emily Furtado and her husband Joseph of Warwick, RI, Mary Catherine Westlake and her husband Bryan of Douglassville, PA, Abigail A. O’Shea and her husband Daniel of Alexandria, VA, Dr. Rachael L. Steinbock of Brookline, MA, Robert T. “Teddy” Steinbock, Jr. of Philadelphia, PA, John Unger Steinbock of Louisville, KY and the late Jonathan Cash who is survived by his wife Christina of Bridgewater, MA. She is also survived by 18 great grandchildren, 2 great-great grandchildren and several generations of nieces and nephews.

Contributions in her memory may be made to Hospice Care at VNA Care (VNAcare.org) or Home Base Veteran and Family Care (homebase.org).


To send her family a message of condolence, please visit www.shermanjackson.com