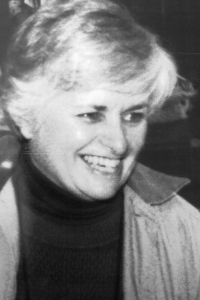 Quinn, Pamela (Lucy), 77, of Natick passed away peacefully on Monday, January 28th, 2019, after a long battle with cancer. She was the wife of Robert Michael Quinn, who died in 2003.

Pamela was the beloved art teacher at Mount Alvernia Academy in Chestnut Hill for 44 years and taught a summer arts program at The Fessenden School in West Newton. She enjoyed working with children and her colleagues. She sparked the imagination of her students and encouraged them to do their best work, which she displayed in the school’s annual art show. She retired earlier this month.

A native of Vermont, Pamela grew up in the village of Saxtons River in the town of Rockingham in Windham County, where her father taught at Vermont Academy. She often shared childhood memories of family, friends and the natural beauty of her “green mountain” surroundings.

She graduated from Lasell College in Newton with an Associate degree in Art. She studied for a time in Mexico before returning to Vermont. In 1966, she married Robert in Bellows Falls, and the couple settled in Brighton, Massachusetts, where they lived for many years to raise their family. In 2003, Pamela moved to Natick.

Pamela is survived by her two precious daughters and sons-in-law, Kirsten and Alex Nagiba of Colchester, Vermont; and Hilary and Christopher McGuire of Franklin, Massachusetts; a sister, Patricia Bull of Selkrick, New York; a brother, John Lucy of Queensbury, New York; and four adoring grandchildren who meant the world to her, Tristan and Sabina Nagiba of Colchester and Timothy and Madison McGuire of Franklin.

A memorial service will be held at the Ginley Funeral Home (www.ginleyfuneralhomes.com), 131 Main Street, Franklin, Massachusetts on Saturday, February 2, 2019 at 1:00 p.m.
Visitation will be held the hour before the service from Noon until 1:00 p.m.
A reception will follow at a location that will be announced at the service.

Memorial donations in Pamela’s name may be made to the American Cancer Society (www.cancer.org) or Seasons Hospice and Palliative Care, 597 Randolph Ave. Milton, MA 02186 (www.seasonsfoundation.org/donate).