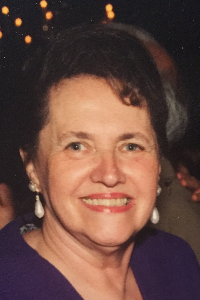 Jean Barbara (Valladoa) Quinn, 83, of South Dartmouth passed away on December 19, 2018. She was the wife of the late Judge Thomas M. Quinn Jr. She was the daughter of Francis and Helen Valladoa. She was the sister of Mary Baskowski of Grafton, Constance Gaucher of Fairhaven, Helen Shanley of New Bedford and the late Francis Jr., Richard and Mark Valladoa. She was the sister-in-law of Rosemary Quinn of South Dartmouth and the late Judge James M. Quinn. Jean was a long-time communicant of St. Mary’s Church in South Dartmouth. Jean was a graduate of New Bedford High School and worked as a medical secretary before marrying Thomas and starting a family. After that point, the singular focus in her life became the care and support of her family. During those years, she was also able to make time to attend the Diman School of Nursing and become a licensed practical nurse. Jean was kind, gentle and unselfish. She faced all challenges without complaint. Jean was a good mother, a good wife and a faithful Catholic. She will be missed by all. Jean is survived by seven children, District Attorney Thomas M. Quinn III and his wife Sharon of Fall River, Andrew Quinn and his wife Linda of Dartmouth, Attorney John Quinn and his wife Jane of Dartmouth, Attorney Matthew Quinn and his wife Beth of Somerset, Kathleen Hood and her husband Timothy of Needham, Peter Quinn and his wife Emily of Dartmouth and James Quinn and his wife Julie of Duxbury. In addition, she is survived by twenty-one grandchildren, two great-grandchildren and many nieces and nephews. The family extends its gratitude to the staff at Alden Court in Fairhaven and the Hawthorn Dialysis Clinic in North Dartmouth for the quality care, compassion and kindness they extended to Jean over the past eighteen months.
Her visiting hours will be held on Saturday, December 22nd from 10:30 AM - 2:30 PM in the Saunders-Dwyer Home for Funerals, 495 Park St., New Bedford. Her Funeral will be held on Wednesday, December 26th at 8:45 AM from the Saunders-Dwyer Home for Funerals, 495 Park St., New Bedford, followed by her Funeral Mass at St. Mary's Church in Dartmouth at 10 AM. Burial will follow in South Dartmouth Cemetery. In lieu of flowers, donations can be made to the New Bedford Standard Times Neediest Family Fund.