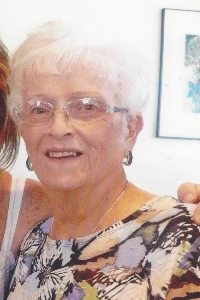 Carolyn A. “Carol” (Warren) Bright 78, of Franklin, died peacefully, at her home, with family at her side, Tuesday November 6, 2018 following a long illness. She was the beloved wife of Louis C. “Louie” Bright, with whom she shared 61 years of marriage.

Born December 7, 1939 in Boston, a daughter of the late Thomas F. and Mabel F. (Kerrigan) Warren, she was a former resident of Roslindale and Medfield, before moving to Franklin in 1993.

She was raised and educated in Roslindale, and was a lunch monitor at the Mattahunt Elementry School and worked at the former Fernandes Supermarket in Medfield.

Carol’s greatest joy in life was her family, she was devoted to them. She treasured all the family gatherings, especially at the holidays. She enjoyed playing cards, and spending the winter’s in Florida. Carol was a member of St. Mary’s Church, Franklin.

She was the sister of the late Thomas, Edward and Mary Warren.

Relatives and friends are invited to attend her funeral Friday Nov. 9th, at 9AM from the Charles F. Oteri and Son Franklin Funeral Home 33 Cottage St., followed by a funeral Mass in St. Jude Church 86 Main St. Norfolk, at 10AM.

Calling hours are Thursday from 4-8PM.

In lieu of flowers, donations in her memory may be sent to Dana Farber/Brigham and Women’s Cancer Center 20 Prospect St. Milford, MA 01757.