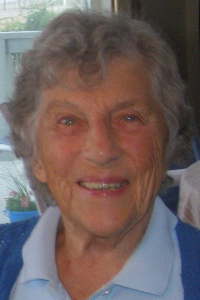 Rhoda Noble Bayley was born in New Haven, Connecticut in 1921 to the late Robert and Alma Jente Noble. During the Great Depression, the Nobles moved several times, finally settling in Winsted, Connecticut in 1936 where her father co-founded the Dano Electric Company which was to become a regional leader in the coil and cable industry in the 1940s and 1950s.

Upon graduation from Winsted’s Gilbert School in 1939, Rhoda entered Syracuse University where she was a Home Economics major and proud member of Alpha Gamma Delta Sorority. While at Syracuse, she met the love of her life, Russell Bayley of Haverhill who was a Business Administration major and an Army ROTC student there as well.

Rhoda and Russell were married in 1943, the beginning of a long and happy marriage that was an inspiration to family and friends. While her husband was overseas, Rhoda worked at the Aetna Insurance Company in Hartford as a dietician. After the war they settled in Natick where they would live for 38 years, first briefly on Timber Lane then for many years on Crescent Street where they raised their four sons. They were loyal and active members of the First Congregational Church in Natick.

Mrs Bayley started teaching Home Economics in the mid 1960s, and worked 20 years for the Framingham Public Schools, first at Winch Park then at Walsh Middle School. She and her husband retired in 1984 and moved to Salisbury Beach where they rebuilt their long time summer cottage to allow for year round dwelling. They loved the beach and enjoyed entertaining family and friends. Daily walks on the beach to the state line and beyond were her passion. Each February Rhoda and Russ would hit the slopes at their timeshare at the Trapp Family Lodge, then spend March in Florida with her only sister and brother-in-law, Muriel and Emil Weber.

The services for Mrs. Bayley will be private. In lieu of flowers donations can be made to the Alzheimer’s Association 309 Waverly Oaks Rd., Waltham, MA 02452.