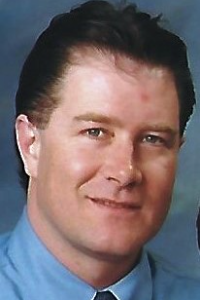 Michael D. Sanford, 54 of Danvers and a former resident of Manchester, NH, passed away unexpectedly at the Beverly Hospital on Thursday, September 20, 2018 with his family by his side.
Born in Phoenix, Arizona and raised in Salem, he was the son of the late Richard D. and Patricia A. (Anglin) Sanford. He was a graduate of Bishop Fenwick High School Class of ’82 and although he took some courses, he was essentially self taught in his field. He first worked for the Thompson Country Club in North Reading for several years. He left the Thompson and for the next twenty years was associated with Angelica’s in Middleton and later for The Continental on Route One. Mike was most recently general manager of Red’s Tavern of Peabody.
Well known in the Restaurant industry, Mike’s real passion was hockey. It was a family passion, with his father and his grandfather avid hockey players as well. He was proud of and enjoyed coaching the Youth Hockey Teams, most especially his son’s team.
Michael is survived by his daughter, Melanie E. Sanford of Manchester, NH, his son, Zachary M. Sanford currently of St. Louis, MO, his sister, Michele A. Welch and her husband Glenn of Belmont, NH, their daughters, Kelly Welch of Keene, NH and Katelyn Welch of Bedford, NH. He also leaves his fiancée, Kim Wells and her son, Zachary Girard both of Danvers, his former wife Cynthia (Hill) Sanford of Manchester, NH, several aunts, uncles and cousins.
Relatives and friends are invited to his calling hours on Monday, September 24, 2018 from 4:00 to 8:00 PM at the Levesque Funeral Home, 163 Lafayette Street, [Route 114 / 1-A] Salem, MA. His funeral service will be on Tuesday September 25th at 10:00 AM in the Immaculate Conception Church, 15 Hawthorne Blvd., Salem, MA. In lieu of flowers, memorial contributions may be made to the Michael Sanford Fund, c/o Manchester Regional Youth Hockey Assoc., PO Box 4958, Manchester, NH 03108. For guestbook and additional information, please visit www.LevesqueFunerals.com