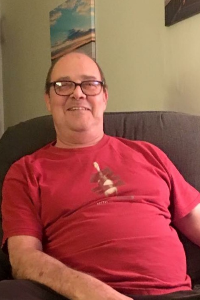 KLIMAS, Michael Glynn, 63, of Winthrop, died on Monday, April 30, 2018. He passed peacefully at 4:28 PM in the arms of his loving wife and surrounded by his family.

Michael was born on July 14, 1954 in Framingham, Massachusetts to Eugenia Lillian Hannagan Klimas (Lily). He grew up in Cambridge, Massachusetts, and spent most of his childhood here. After the death of his mother at a young age, Michael lived with close friends, including lifelong best friend Gilbert Comeau, and was supported by his guardian, the late Ignatius Piscatello. He went on to graduate from Cambridge High and Latin.

Michael wed Gail Christine Keating, originally of Cambridge, in June of 1983. The couple moved to Winthrop to start their family. Michael and Gail went on to have two daughters. Michael is survived by his wife Gail, and his children, Lisa Lillian Klimas, Kristin Elizabeth Klimas, and son-in-law Spencer Meehan. Michael also leaves behind his cherished nephews and nieces, Matthew Keating and wife Jacqueline Keating, both of Winthrop, Massachusetts, Daniel Keating, of Lowell, Massachusetts, and Emily Kasinskas, of Lowell, Massachusetts, and his great niece, Chloe Keating. He is also survived by his beloved brothers-in-law Stephen, Brian and Jeffrey Keating, and the late Edward Keating, as well as mother-in-law Joan Keating.

Michael loved to play sports and played on several teams throughout his lifetime, well into his forties. His daughters remember getting excited to go see their Dad play on the local softball team. He also loved to watch sports and was an avid fan of the New England Patriots and other Boston teams. Michael would take his daughters to sporting events often when they were young.

One of Michael’s favorite past times was bringing his children camping in New Hampshire during the summers. He had a large group of friends and enjoyed singing along to Motown sitting by a campfire at night. He loved to swim, grill, and fish with his family, and felt most relaxed spending a long summer day at the beach with his wife and his children. Throughout his children’s lives, Michael continued to be very involved and supportive of all their endeavors. His children knew that they could call him at any hour if they needed help. He was a proud and loving father, and if his children were happy, he was happy.

Michael and Gail were always willing to help anyone and welcomed everyone in their home. Michael always told his children that if they knew of someone without a place to go for a holiday to invite them to their house. His kindness and open arms towards others will always be remembered.

Visitation hours will be 4:00-8:00PM on Friday, May 4, 2018 at Maurice W. Kirby Funeral Home 210 Winthrop St. Winthrop, Massachusetts. Family and friends may gather at the funeral home on Saturday, May 5, at 9am, before leaving for a procession to St. John the Evangelist Church in Winthrop, Massachusetts, for a Funeral Mass, at 10am. A reception will follow the Mass at the Winthrop Arms. Friends and family of Michael are welcome to join. Donations in his name can be made to a charity of your choice.

The family wishes to extend their gratitude to the team at Mass General Hospital – White 10 for their kindness and compassion in Michael’s final days.