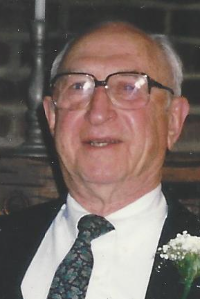 His paternal great-grandparents, Hugh and Susan (Adamson) McSherry came to Naugatuck from Ireland in the late 1840s. His maternal great-grand-parents Patrick and Mary (Reardon) McCarthy arrived in Naugatuck in the 1850’s. His grandparents Barney and Winifred (Kelly) McSherry and John and Rose (Leonard) McCarthy were born in the U.S. He was born in Waterbury son of Hugh B. and Marie (McCarthy) McSherry and was a lifelong resident of Naugatuck.

He was a graduate of St. Francis School Class of 1933 and of Naugatuck High School, Class of 1937 where he played football and basketball for the legendary Coach Pete Foley. He then attended Bates College where he played Freshman Football earning his Class numerals, Varsity Basketball, captain of the 1941-42 team and graduating in 1942 with a business degree.

His career in business would have to wait. In June 1942, he began active duty with the U.S. Army Air Corps serving in the 20th Airforce, 58th Bomb Wing, 468th Bomb Group’s 792nd Bomb Squadron which was part of the Billy Mitchell Squadron that brought the first B - 29’s into the War. He traveled through the Middle East to serve in India, China, and Burma (CBI) as well as in the Northern Marianas on the Island of Tinian in the Pacific earning six battles stars, six bronze stars and attaining the rank of Staff/Sergeant. After WW II, he worked several years for the U.S. Rubber Co., in their Chicopee, MA, plant. In 1957 he began his career as a Life Insurance Agent for the Metropolitan Life Insurance Co., and worked 25 years until retiring in 1981. After retirement he continued in life Insurance part time and for a time he also owned and operated the John K. McSherry Real Estate Co.

Jack was involved in and supportive of his children’s school and sporting activities. He was committee Chairman of Cub Scout Pack 108. Jack was a life - member of the B.P.O. Elks #967 in Naugatuck, President of the NAVA Ski Club, and member of American Legion Post 17, the Disabled American Veterans, the Ancient Order of Hibernians Division 1 Patrick Conran Division, Irish Mayor of the Day in 2011 (his administration gave all children the day off from school and reduced taxes), the MetLife Retiree’s and the Bates College Alumni Association. He was a communicant of St. Francis of Assisi Church.

In 2008, Jack was honored by the Ancient Order of Hibernians as Parade Marshall for the St. Patrick’s Day Parade. All marchers arrived safely and on time at their destination. Jack was pleased to receive the Robert L. Genovese Patriotism Award on November 9, 2013 from the Naugatuck High School Alumni Association.

A concelebrated Mass of Christian Burial was held on Monday, April 30, 2018 at 11:00 A.M. in St. Francis of Assisi Church, 318 Church St., Naugatuck. Burial with military honors followed in St. James Cemetery, Naugatuck. Calling hours were Sunday, April 29, 2018 from 2:00 to 5:00 P.M. at the BUCKMILLER THURSTON MENGACCI FUNERAL HOME 82 Fairview Avenue, Naugatuck. Members of the Naugatuck Veterans Council assembled for their Ritual at the funeral home Sunday at 3:30 P.M. The Ancient Order of Hibernians Division 1 Patrick Conran Division followed with their Ritual and the Naugatuck Elks conducted their Ritual Sunday at 4:30 P.M. In lieu of flowers, donations can be made to Flora’s Pet Project, 38 Fairview Avenue, Naugatuck, CT., 06770 or to the Naugatuck Education Foundation, P.O. Box 1717, Naugatuck, CT., 06770.