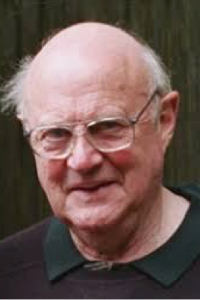 John Biggers was a world-renowned reproductive physiologist whose research spanned 70 years and three continents. He was born in Reading, England in 1923. After training at the Royal College of Veterinary Medicine, he switched his focus to mammalian physiology, earning his PhD from the University of London. He went on to work at the University of Sydney (Australia), before returning in 1955 to a position as a Commonwealth Fellow, St. John’s College, University of Cambridge, England. Following that, Dr. Biggers took a position as senior lecturer at the Royal Veterinary College of London University. Dr. Biggers emigrated to the United States in 1959, working at the University of Pennsylvania as the King Ranch Research Professor of Reproductive Physiology, then moving to John Hopkins University Department of Population Dynamics, School of Hygiene and Public Health in 1967. In 1972, Dr. Biggers finally moved to Harvard Medical School as a Professor of Physiology, Department of Molecular and Cellular Physiology. In 1958, at the University College of London, he and his colleague Anne McClaren (later bestowed Dame by Queen Elizabeth II) published their landmark paper in Nature, reporting the first successful development of a mammalian (mouse) early embryo in culture. This foundational work contributed to the establishment of human in vitro fertilization (IVF), and the birth of over five million children over the past two generations.

Dr. Biggers was dearly loved by his many students and research colleagues and became a mentor to many of the current leaders in the field of reproductive biology. His labs at U Penn, Hopkins and Harvard were all considered to be highly supportive training grounds for young researchers. He not only encouraged, but expected, independent thinking and the pursuit of original ideas. He was also very supportive of his researchers going on to develop their own labs and own research groups.

In the 1970’s Dr. Biggers was appointed by the Carter administration to be the Chief Scientific Advisor to the Ethics Advisory Board of the Department of Health, Education and Welfare and was charged with holding hearings on the ethics of IVF and embryo transfer. He testified before the US Senate on this topic. He also served as a consultant to the World Health Organization travelling many times to Pakistan and Bangladesh to consult on contraceptive research to aid in the overpopulation issues facing developing countries.

Dr. Biggers was past president of the Society for the Study of Reproduction, and served as Editor in Chief of Biology of Reproduction and Associate Editor for several journals including, Journal of Experimental Zoology, In Vitro, Human Reproduction and Reproductive BioMedicine. He authored over 250 scientific papers during his career, in addition to numerous chapters and monographs.

In 2017, at the age of 93, he and co-author Carol Kountz, published a biography of Walter Heape, one of the pioneers in reproductive medicine. And only three months ago, in January 2018, he and one of his post-doctoral mentees, Dr. Catherine Racowsky, completed the introductory chapter of the soon-to-be published book “In Vitro Fertilization: The Pioneers’ History”. As Catherine has remarked “John was remarkable in his zest for life, his love of science and his intrigue with the mammalian reproductive system”.

John had many hobbies. He was an avid cook, a knowledgeable naturalist and gardener, a self-taught pianist, and an accomplished nature photographer. HIs thirst for adventure and knowledge led him all over the world to all continents including Antarctica.

Colbath-Hess, Elias and Alan Hess-Childs, and Rowan and Linden Hess; and a great grandchild, Kiran Pollock. He will be sorely missed by his friends and family.

A memorial service and reception will be held at Brookhaven, 1010 Waltham St, Lexington MA, Sunday, April 22 at 3 pm; accepting donations in lieu of flowers to: Planned Parenthood or to the Arnold Arboretum