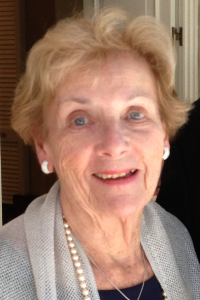 Mello, Genevieve G. (Boland), of Milton and Hingham, passed away peacefully March 14th. Beloved wife of the late Edward. Devoted mother of Joanne M. Pratt of Florida, Edward J. Mello of Texas, and the late Susan M. Mello and Nancy M. Lancaster. Sister of the late Catherine Collins. Also survived by 10 loving grandchildren, 10 beautiful great-grandchildren, three nieces, a nephew, a daughter-in-law and a son-in law.
Gen was the daughter of Bertha and Joseph Boland and grew up in Dorchester, Massachusetts graduating from St. Gregory High School. After working for a few years in Boston, Gen married her husband Ed at the age of 25, and the couple moved to Milton where they were residents for 50 years. Gen was deeply committed to her Catholic faith, actively supporting St. Elizabeth’s Catholic Church as Principal of the elementary religious education program (CCD), Prefect of the Sodality of Our Lady, and as an involved parishioner.
Together with Ed, she selflessly performed all of the loving and sometimes difficult tasks of parenting four children, with a huge St. Bernard dog in the midst! Gen enjoyed taking the family to Nantasket, Duxbury and Humarock beaches and always planned a summer vacation in Popponesset on Cape Cod. As the children got older, she returned to work as a Sales Associate at Filene’s at South Shore Mall in Braintree.
In retirement, Gen cared for her ill husband for six years and, after his passing, sold the longtime family home in Milton and moved to Braintree. Always active and energetic, Gen often visited her grandchildren and great-grandchildren around the country, took up swimming as a form of physical therapy and exercise and made many new “pool friends,” as she endearingly referred to them. She also became an ardent Patriot’s fan. In early 2016, Gen moved to Linden Ponds in Hingham where she again made new friends and enjoyed living in a supportive senior community.
Friendly, outgoing, social and relentlessly upbeat, Gen overcame a lot of challenges in her life through faith, resilience, and courage. She lived an admirable and impactful life. We will all miss her deeply.
Visiting at the Alfred D. Thomas Funeral Home, 326 Granite Ave., Milton, Friday 3 to 7PM. Funeral Mass at St. Elizabeth Church, Milton, Sat., March 24th, at 10: 30 AM. Burial Milton Cemetery. In lieu of flowers expressions of sympathy may be made to Linden Ponds Student Scholars, Attn: Philanthropy Dept., 203 Linden Ponds Way, Hingham MA 02043.