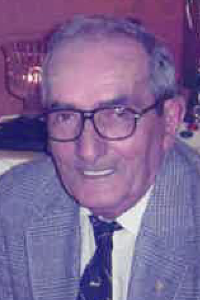 Anthony was born in Provincetown the son of Antone and Louisa (Perry) Joseph. He attended Provincetown High School where he enjoyed playing several sports but excelled in basketball and played on several championship teams. Immediately after graduation he and many of his High School friends enlisted in the Army during World War II. Anthony served in the Battle of the Bulge in Belgium and Germany and continued to be a very proud Veteran his entire life. He was a Charter Member and Contributor to the World War II Memorial in Washington, D.C. and visiting the completed Memorial in 2005 was a highlight of his life.

In 1947 Anthony met Alice O'Grady from Boston. He proposed to her that summer in a dory in Provincetown Harbor and together they built a life in their home at 119 Bradford Street where he lived until his death. Anthony was a fisherman which, as Provincetown people know, is not a job but a way of life. He fished the east coast from Maryland to Maine during his lifetime and knew every working detail of most of the working draggers in Provincetown. His friend, the late Alfred Silva who built models of the Provincetown fishing fleet would often discuss details of each of the boats with Anthony while he was constructing his models.

During his retirement while caring for his wife, Anthony worked summers in the parking lot for St. Peter the Apostle Church. Family, church and country were the center of Anthony's life. He kept a detailed atlas of all the travels of his family and loved detailing their adventures with his hand-written notes on the atlas maps. Every Christmas Anthony displayed a large Christmas Village and enjoyed inviting friends and neighbors into his home for his Christmas display. During every Portuguese Festival he proudly flew his Portuguese and American flags from his windows.

Anthony was pre-deceased by his wife Alice and his son Anthony Charles Joseph. He is survived by his daughter Kathleen Meads and her husband Harry Palmer, his daughter, Maureen Hurst and partner Emanuel Figueiredo and daughter-in-law Susan Joseph; his grandchildren: Richard and Jeremy Meads, Gretchun Ciluzzi and her husband John, Courtney Hurst and Frank Travers, Halcyone Hurst and Oniel Myrie, and Kim Pisano: his great-grandchildren; Jack, Sailor and Wade Ciluzzi, FJ Myrie and Tabitha Townsend. He is also survived by his sister, Leona Caton and many nephews, nieces and cousins.

Anthony's family is most grateful to his wonderful neighbors who constantly watched out for his well being and helped keep him in the home he loved.

A Funeral Mass will be held at 11:00 am on February, 28th at St. Peter the Apostle Church, 11 Prince St, Provincetown. Burial will be in St Peters Cemetery. A gathering celebrating Anthony’s life will follow at the Joseph home.