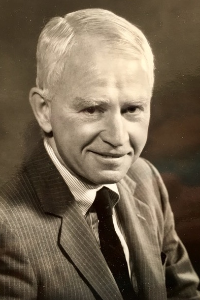 EMERY, John Clarke Died peacefully in his sleep on February 1, 2018 at his home in Dedham, MA. He was 87. Born in Providence, RI in 1930, he graduated from Groton School (‘48), Harvard College (’52) and Harvard Law School (’57). He served as a Major in the U.S Army. He was a partner at the Boston law firm, Sullivan and Worcester since 1968 and continued to work there as senior counsel until his death.

John spent his summers on Martha’s Vineyard and winters in Stowe, VT where he skied well into his 80s. He was an avid traveler, gardener and reader. John had a wonderful quick wit and was a perennial student. For a staunch New Englander, he was enthusiastic and energetic with everyone. Family was very important to him and he is fondly remembered by his many nieces and nephews. He is survived by his loving wife of 51 years, Jody Brown, and his son, John C. Emery Jr. He was predeceased by his twin brother Hiram and grandson Darius. He was a member of the Dedham Polo Club, the Edgartown Yacht Club, and the Reading Room.

A memorial service will be held in St. Paul’s Episcopal Church, Dedham, Monday, May 7 at 11:00am. Relatives and friends kindly invited. Interment private.

In lieu of flowers, the family requests that contributions be made to Mass Audubon, the National Trust for Historic Preservation and Harvard College.