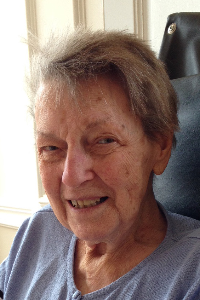 Tryne G. (Griek) Costa, 95, of New Bedford died January 24, 2018 peacefully surrounded by her family at Care One.
She was the former wife of the late Paul Dillingham, Ralph Metcalf and Manuel Costa.
Born in West Sayville, NY, the daughter of the late Albert and Gabrielle (Claus) Griek, she was raised on Nantucket and lived in new Bedford most of her life.
Mrs. Costa was a member of The First Unitarian Church of New Bedford. She became a woman on a mission in 1969.
She was the founder of Aid Center in New Bedford and worked in jails and hospitals, with organizations such as PACE, Salvation Army, Center for Human Resources, Fall River Mental Health Program, Headstart, the Patient Information Network and Department of Education. In the 1990's she helped establish the Community Center for Nonviolence . Her numerous foster children over the years have gone on to live productive lives and have families of their own.
She will be missed by many.
Survivors include 2 daughters, Eve O'Rourke of Petaluma, CA and Anastacia Lundholm and her husband Oliver of Bellingham, WA; a brother, Albert Griek, Jr. and his wife Virginia of New Bedford; 6 grandchildren; 9 great-grandchildren; and 2 great-great-grandchildren.
She was the mother of the late Stephen Dillingham and Hilary Hunt.
Her Memorial Service will be held on Sunday, February 4th at 2 PM in The First Unitarian Church of New Bedford, 71 8th St. New Bedford. Arrangements are with the Saunders-Dwyer Home for Funerals, 495 Park St., New Bedford.

She has gone into jails.

She has gone into hospitals.

Always, she has gone the extra mile.

“Parents don’t have to scream at their kids ... hit, spank, yell, ground them or have lots of time outs,” says Tryne Costa.

The impassioned president of Family Nonviolence Inc. is speaking out on her favorite topic, the family unit, and all permutations thereof.

“What expresses what we really mean?” Tryne asks rhetorically. “The words we use? Our body language? Tone of voice?”

Body language is first, she quickly answers. Followed by tone of voice, then the actual words we use. “It’s not what we say, but how we say it,” Tryne emphasizes.

“People have to realize this in dealing with each other ... especially parents with their children.”

The human animal has more ways of hurting one another than all the planet’s other species combined, she intimates.

Kindness -- it is a subject the amazingly youthful 80-year-old New Bedford woman has been addressing, one way or another, for more than 30 years and I’m stretching my spine looking up to anyone who can maintain this high level of commitment.

However, perhaps, we have to go back to 1969 in order to understand fully. That’s the year, tragically, Tryne’s son Stephen, a longtime victim of chronic ulcerative colitis, died of cancer.

“He was using drugs to kill the pain,” Tryne recalls sadly, picking her words carefully. “And with his illness he couldn’t go into rehab. What I went through with him with drugs I wouldn’t wish on my worst enemy.”

Or, more to the point, any other parent.

It was after Stephen’s death, that the mother of three (now grown) daughters became a woman with a mission. No other parent, she vowed to herself, would ever go through the agony she had, if she could help it.

“I started helping kids with their families in an organization called AID for Addicts -- long before the disease of that name -- which met in the (New Bedford) First Unitarian Church basement.”

Her feelings, then as now, were that much of the drug problem, as indeed so many other difficulties, stems from lack of civility and chronic miscommunication between parents and children.

By 1970, the organization was taken over by the Center for Human Resources (later called Health and Human Services). The program, unfortunately, collapsed in 1980-81 due to lack of funds, but not before helping hundreds of teens, she adds proudly.

“In the Reagan era, all the funds for these types of things suddenly disappeared,” she says disdainfully. “Which was tragic because kids were flocking to us and there was great need.”

Tryne took advantage of this lull, however, to go back to school, graduating in 1983 with a double degree -- sociology and psychology -- at UMass Dartmouth.

And, as so often with education, one building block led to another, with Tryne’s interests mushrooming, always, mind you, with the welfare of the family unit uppermost in mind.

What had started off as a drug-related mission evolved into family mediation and re-connecting families, which, in turn, morphed into prevention of drug abuse and violence.

Today, the emphasis has been placed squarely on the effects of positive parenting.

“After my degrees, I didn’t want to be just an ordinary social worker -- I’d been ‘grandmothered’ into a licensed clinical social worker -- because the system is a revolving door for workers.”

She says she can’t blame social workers for wanting to better their positions, but every time one does it is a disservice to a client.

It has been her experience that it takes at least three months for a person to relax and start trusting a worker.

“Suddenly, a client is yanked away from someone they trusted and liked, then turned over to a brand new worker.”

Valuable ground is lost, over and over again, in some cases, Tryne says sadly.

“My approach is to get involved and stay involved, as needed, through the ups and downs of a person’s life. I have people whose lives I’ve been a part of for 20 years, or more.”

As examples, she points to the virtually homeless, sometimes addicted, children she often took into her own home, cleaned up and fed, all the while desperately trying to reconnect them with their families.

“I’ve taken in more than 20 foster kids over the years with problems ranging from substance abuse and family problems to epilepsy, emotional trauma, and post traumatic stress disorder.”

It was a 24/7 job, she says, but one she would never have dreamed of abandoning -- with or without any specific agency behind her -- because of the strength of her feelings.

Indeed, to this day, she continues to help in any way needed. “Most of the children and foster children I’ve dealt with are still in my life,” she says proudly.

Perhaps it comes down to trust.

Because these former needy children trusted Tryne so implicitly they know they can still call her whenever a decision must be made in their lives.

Over the years she has aligned her not inconsiderable talents to any number of agencies -- PACE, Salvation Army, Center for Human Resources, Fall River Mental Health Program, Headstart, Parent Information Network, Department of Education -- with as many different titles as there have been locations.

In the early 1990s, Tryne even helped establish New Bedford’s Community Center for Non Violence with the Rev. Bob Heskett.

“Over the years I’ve evolved a more preventive approach,” she explains. “Since 1991, for example, I’ve been very involved in parenting groups -- family mediation at PACE, active parenting courses, Family Nonviolence Inc. -- as well as parent education for the New Bedford school system.”

But the bottom line is this Tryne Costa’s every move has always been designed to prevent family violence and separation, and reconnect splintered families.

“My goal is helping area parents to manage those children with emotional, educational and behavioral problems without resorting to DSS and other outside help.”

Most parents love their children, she says, but not all have the ability to show love and kindness.

It is Tryne Costa’s fondest dream to teach them how.