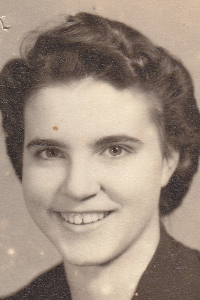 On December 29, 2017, Dorothy Mae (Butcher) Wilson joined her husband Wayne in Heaven to celebrate the 73rd anniversary of their marriage.

Dorothy was born September 18, 1925 to Leafa and Daniel Butcher of Adel, Indiana. She spent her early years in and around Spencer, IN. She married Joseph "Wayne" Wilson December 29, 1944 and together they reared four children all of who survive: Joyce (Joe) Ellingwood of Anderson; Norma Jean (Douglas) Trennepohl of Wheatland, WY; John "Buddy" Wilson of Anderson; and James Barry (Elica) Wilson of Bourbonnais, IL.

Dorothy's primary work was as a housewife, mother and caregiver to son, Buddy. She also worked for several years for the Anderson School System. She was an avid worker in her church, Goodwin Memorial Church of the Nazarene (now New Life). At various times, she was a member of the church board, taught Sunday school, and served in the hospitality ministry. In 1987 she and her husband received the church's Distinguished Service Award.

Following retirement she spent many happy years living in Spencer, IN where she attended the Spencer Nazarene Church. Both in Spencer and Anderson, Dorothy found her calling in visiting shut-ins and sending cards and letters to those whom she felt needed a word of encouragement or guidance.

Preceding Dorothy in death besides her parents and husband were brothers, Kenneth Butcher (who died as an infant) , John Butcher and Samuel Butcher; sisters Margaret Bryan, Agnes Bixler and Mary Morrow.

She is survived by two brothers, Daniel (Barbara) Butcher of Bloomington and Eugene (Sandy) Hause of Adel. She is also survived by sister-in-law Gerri Butcher of Baton Rouge, LA and brother-in-law Robert (Charlsie) Wilson of Prague, OK, as well as many grandchildren, great and great great grandchildren, nieces and nephews. Also left to cherish her memory are special friends, Carmen and Ron Shrope of Spencer.

We would like to give special thanks to her caregivers at Miller's Merry Manor in Chesterfield and to Season's Hospice for their tender loving care.

The funeral service for Dorothy will be held on Wednesday, January 3, 2018 at 2PM at Rozelle- Johnson Funeral Service, 229 South Rangeline Road, Anderson, with her son, Barry, officiating. Committal service will follow at Anderson Memorial Park Cemetery. Visitation will take place 2 hours prior to the funeral at the funeral home. Memorial Contributions may be given to Spencer Nazarene Church Care Ministry, 126 E. Market Street, Spencer, IN 47460