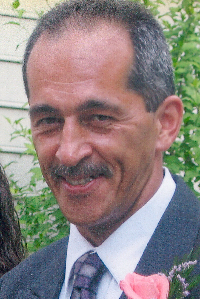 Born in Brockton, MA Sep. 22, 1957 to his late parents Priscilla Fullerton & Joseph Ugi. He was a 1976 graduate of SouthEastern Reg. Voc. School in Easton, MA. A Previous resident of numerous South Shore communities and & proud homeowner of 18 years in Derry, NH.

Richie was a sought-after perfectionist, painter, contractor and an avid woodworker. He brought an immense amount of passion & pride to his craft. Dedicated & committed to his family, Richie was grateful for the joy and love they shared together.

Richie will be greatly missed by his family, his extended Donnelly/Bloomer families and many loyal friends and clients.

Calling hours were held on Wednesday, December 20, 2017 from 6 – 9 pm in the Peabody Funeral Homes and Crematorium, 290 Mammoth Road, Londonderry. A Mass of Christian Burial was celebrated on Thursday, December 21, 2017 at 10:00 am in St. Thomas Aquinas Church, 26 Crystal Avenue, Derry. The burial followed in Forest Hill Cemetery, East Derry, NH.