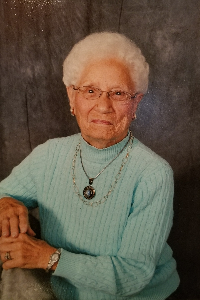 She was born on December 27, 1922 in Frankton, Indiana, the daughter of John B. and Cleo D. (Vermillion) Foland. She was employed 32 years by St. John's Medical Center as a surgery scheduler, retiring in 1984. She attended Vermillion Christian Church and enjoyed camping, fishing and dancing.

She was preceded in death by her parents, her husband, Elmer R. Foreman, son-in-law, John Wise, and sisters Gloria Shirk and Lee Stinson

Funeral services will be held on Friday, October 27, 2017 at 3 PM at Rozelle Johnson Funeral Service, officiated by Revs. Keith Cramer and Paul Werling. Burial will follow at Anderson Memorial Park Cemetery.
Visitation will be held 2 hours prior to the funeral service.

Memorial Contributions may be given to the American Heart Association or the Vermillion Christian Church.