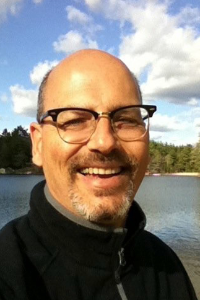 Steven E. Listro Sr, 57, from Atkinson, NH, died unexpectedly Wednesday July 19. Steve was the second of four children of his parents Hope (Hovey) Listro of CT (formerly Revere, MA) and the late Salvatore E. Listro. Steve was raised in Revere, MA and summered with his family in Hemlock Heights on Big Island Pond in Atkinson, NH throughout his life. He graduated from Northeast Regional Technical High School in Wakefield, MA, and began a successful career installing and demonstrating commercial printing presses. He later worked through the the ranks to become regional sales manager for KBA North America. Steve was an avid deer hunter using both rifle and bow & arrow. Priding himself to provide for his loved ones, things like traveling with family created some of the most memorable experiences.
Steve was a proud member of Alcoholics Anonymous. During his many years of sobriety he gave selflessly of himself to other members. He was also a member of the Mankind Project (MKP) for over 15 years serving many key roles, constantly helping other men reclaim a sense of safe, sacred masculinity, showing them the way back to their own hearts. Through service to MKP and the example of his life, he taught the importance of giving back. Steven leaves his sons, Salvatore A. Listro of Tewksbury, MA and Steven E. Listro Jr. of Atkinson, NH, step sons, Allan Baule and his wife Kellie of Tyngsboro, MA, Michael Baule and his wife Carrie of Derry, NH. His siblings, Laura Listro and her husband Patrick of Tewksbury, MA, Joann Listro of Atkinson, NH, Anthony Listro and his wife Joanne of Woodstock, CT. He also leaves many dear cousins and friends. He will always be "Uncle Silly" to his closest nieces and nephews Joseph, Nicholas, Sarah, Derek, Linnea, Benjamin, Samuel and Anthony. Steve was predeceased by his former wife, Irene O'Brien. Relatives and friends will be received Wednesday Evening August 2, from 5:00 - 8:00 PM. Thursday morning, August 3, from 9:00 AM until 11:00 AM in the Tewksbury Funeral Home, corner of 1 Dewey and 975 Main Sts. (Rte. 38) Tewksbury, MA., (978) 851 2950. A Funeral Mass will follow at 11:30 a.m. in St. William's Catholic Church, 1351 Main St. (Rte. 38) Tewksbury. Internment will be held at a later date.