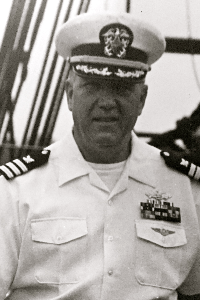 Captain James Sills USN (Ret.) passed away July 8th at his home in Natick, Massachusetts after a battle with cancer. Jim “Tiny” Sills was born in Tacoma, Washington on August 19, 1956 to Colonel James (USAF) and Audrey Sills, the youngest of three sons (Douglas and David).

The Sills family moved with changing military assignments and Jim spent his youth in Washington State, Illinois, Washington DC, Kansas, England and Germany. He would later move to Massachusetts and call the Boston area his home.

He played defensive tackle on varsity football squads through high school and college. He enjoyed skiing in Vermont, Colorado and the Alps with his brother Dave and friends. In 1977, he enlisted in the U.S. Navy and qualified as an Air/Sea Rescuer and a SH-3 Air Crewman. His afloat tours include the aircraft carriers USS Carl Vincent and USS Constellation. Jim graduated with a Bachelor of Science in Business Administration, a Masters of Science in Applied Management and a Masters of Science in Government Contracting.

Jim received a commission in the U.S. Navy Reserve, beginning his service as an Ensign and retiring with the rank of Captain. He served two tours as a Commodore and completed three deployments to Southwest Asia. As a civilian, he was an adjunct professor at Lesley College; teaching international business, operations management and global affairs. He also worked as a government contract manager for General Dynamics Network Systems for many years.

Captain Sills was awarded the Legion of Merit and the Bronze Star for accomplishments in support of Operations Iraqi Freedom and Enduring Freedom. Jim was a proud and devoted father who was often heard expressing how much he loved, admired and wished to spend more time with each of his children. He particularly enjoyed making memories outdoors with them in Vermont and Maryland.

Surviving Jim is his daughter Erica Sills Rimmer (29) and her husband Martin of Charlestown, son James Sills (17), daughters Fiona Sills (16) and Lily Sills (13), and their mother Diane Sills of Carlisle; his brother David Sills and his wife Pam of Cambridge, VT, and their two daughters Stephanie Sills (26) and Kristie Sills (23), along with his former spouse Mary Rossetti Wills, sister in law Peggy Humphreys and her son Douglas Sills. He was preceded in death by parents James and Audrey, and brother Douglas.

Jim was well loved by family, friends, colleagues and shipmates alike. With his 6’8” frame, he was an imposing figure of a man but known for his humility, good humor and equal treatment of all. Family, friends, shipmates and coworkers alike sought out his wisdom and counsel often. He would always make time for those in need.

He will be missed, but never forgotten.