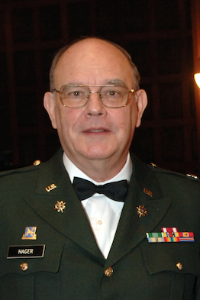 Hager, Michael E. Attorney and Army Officer
of Winchester, MA. Passing on Friday, May 26, Michael Edward Hager was born in Boston in 1939, the son of Richard Howard and Katherine Griffin Hager. Growing up in Medfield and Dedham, Michael graduated Roxbury Latin School in 1956, earning the Lowell Prize in Classics. He majored in History and Science at Harvard College, where he was a John Harvard Scholar, graduating in 1960 with a B.A. magna cum laude. While attending Corpus Christi College at Oxford University (England) as a Fulbright Scholar, Mr. Hager conducted research in pre-Socratic philosophy and mathematics. Afterwards, while attending Harvard Law School, he served as a Classics translator for the Adams Legal Papers, a Harvard University Press publication. Michael completed a thesis on the Yearbooks of 6 Richard II, published by the Ames Foundation, later co-editing another edition of the Yearbooks of Richard II. Graduating from Harvard Law School in 1964, Mr. Hager became a member of the Massachusetts bar.
Following a tour of active duty with the Army Reserve, where he was trained in military intelligence, Private Michael E. Hager progressed through the ranks up to Specialist 6, accepting a direct commission to First Lieutenant in 1969, with promotions to Captain, Major, and Lieutenant Colonel, followed by transition to the Retired Reserves in 1992. Over his military career, he served with the 241st MI Detachment and the 421st MI Detachment, where he engaged in strategic intelligence research on the Soviet Union and Warsaw Pact nations primarily for the Defense Intelligence Agency, receiving the Meritorious Service Medal and the Army Commendation Medal. He was a life member of the Association of the United States Army, the Military Officers Association of America, the Reserve Officers Association, and the Military Order of the World Wars.
During this same period from 1964, he commenced an association with the Boston firm of Choate, Hall & Stewart as a litigator, remaining there until 1973, when he joined the firm of Dane & Howe, becoming a partner in 1976. He practiced creditors rights law at Dane & Howe until the firm’s dissolution in 2004, at which time he began individual practice in that area, continuing his specialty in automotive financing, where he represented such clients as Ford Motor Credit Company and DaimlerChrysler. He removed his practice to 11 Beacon Street in mid-2005 and remained there until his demise. He argued several landmark commercial cases before the Massachusetts Appeals Court and the Supreme Judicial Court. He was a member of the local federal district and appellate courts, as well as the United States Supreme Court. His professional memberships included the Commercial Law League and the Selden Society.
Michael’s great avocation was Germany – both language and history – especially concerning 18th and 19th century emigration to America. This found expression in his membership in such organizations as the Goethe Society of New England, where he served as president from 1983; Deutsches Altenheim, where he was a trustee from 1994; and the German Aid Society of Boston. He lectured and published in the area of genealogy and served as a genealogical guide and translator for a tour to Germany. In the mid-1990s he became a parishioner of Holy Trinity German Catholic Church in the South End, whose early history fascinated him and which he served as an unofficial genealogist and historian. In 1999, Michael was awarded the Order of Merit (First Class) from the Republic of Germany in recognition of his contribution to German-American relations. He was a life member of the Medieval Academy of America, the New England Historic Genealogical Society, the National Genealogical Society, Palatines to America, the Eire Society of Boston, the Society for Colonial Wars and the Sons of the American Revolution. For several years he served as a trustee and corporate secretary of the American College of Greece.
Michael married the former Deirdre Gavin in 1966 and is survived by her and their four children: Gavin, of West Newfield, Maine; Philip, of Falls Church, Virginia; Kristen Hager of Breinigsville, Pennsylvania; and Audrey Maeve Barker of Montrose, Victoria, Australia. There is also one grand-daughter, Mary Louise Hager, and one grandson, Hudson Drew Barker.
Viewing will be at the Cathedral of the Holy Cross in Boston on Thursday, June 1, from 4:00pm to 6:30pm. A funeral mass is scheduled for Friday, June 2, at 10:00am at the same location. Military honors will be conducted at the Massachusetts National Cemetery in Bourne, MA, following the funeral. In lieu of flowers, donations can be made to the German Aid Society or the USO.