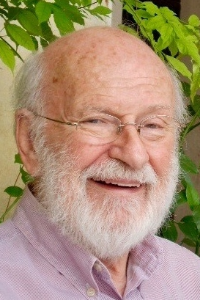 The Rev. Professor Harold Raymond Bronk, Jr. (Ray) died on May 20, 2017 surrounded by his family after a year of battling cancer. Born in Brooklyn, New York to Anna Lake and Harold Raymond Bronk. The day of Ray’s birth was also the inauguration of President Herbert Hoover. His mother worked for the Hoover campaign and was disappointed to turn down her invitation to the inauguration party. He grew up a thorough New Yorker and liked to claim that he never lived far from Times Square Manhattan. Born in the turbulent years of the stock market crash of 1929 he experienced a major upheaval in the family. His father owned and operated a pharmacy in New Jersey that had to close causing serious financial and emotional struggles. Ray had an insatiable appetite for learning and frequented the local library. One day the librarian told him that he couldn’t take out a particular book because it was not for children. The librarian called his mother and she confirmed that he could take out any book he wanted. And he did. He was fluent in Italian and German and had a highly developed intellect.
He married Ruth the mother of his seven children at the age of 19. They were both active in the Baptist Church and attended a Baptist seminary for a brief time. Ray continued his education graduated from Hofstra University in 1950 and Berkeley/Yale Divinity School in 1954. He was ordained as an Episcopal priest and served in parishes in Massachusetts, New York and Pennsylvania until he became disillusioned by the politics of the Episcopal church and renounced his orders. Ray then became Roman Catholic. He took his family to Germany to study for the priesthood of the Roman Catholic Church, receiving a dispensation from Rome to be a married priest. He studied at the prestigious University of Tuebingen in Germany under the well-known author and theologian, Hans Kung, attended the Second Vatican Council in Rome and pastored a small country parish in Germany. He was ordained in the Catholic Church in Germany, an event that made international news.
Then his life took another major turn. He left his studies and career in the Roman Church and returned to the United States to live and work in Boston. He joined the faculty of U/Mass Boston in 1968 and became one of founders of the Boston campus teaching Philosophy and the Study of Religion. Ray often spoke of his work at U/Mass as a different kind of ministry working to help the underprivileged gain a university degree. After 25 years, he retired from teaching. During his years at U/Mass he became active in the Anti-Viet Nam student protests and advocated for the establishment of the Pine Street Inn homeless shelter. He fought for the retention of affordable housing on Dartmouth Street in the heart of the city, a housing complex that is today called Tent City. Many years after retirement he worked at Pine Street Inn in the Housing First Project helping procure permanent housing for homeless men and women.
In 1991 he returned to the ordained ministry of the Episcopal Church in Boston. He was married to the Rev. Dr. Joyce Caggiano. They lived in Milton, Massachusetts for the last ten years. Dr. Caggiano most recently has been the Associate Rector at St. Michael’s Episcopal Church in Milton.
Ray leaves his brother Charles of North Carolina; his sister Charlotte of Florida and his deceased sister, Jean. He was the loving father of seven children: Harold R. Bronk, III of Newton; Karen Bronk, of Turner, Maine; Peter Bronk, of California; Stephen Bronk, of Berlin, Germany; Paul Bronk of Lynn; and Timothy Bronk, of Albany, New York and was predeceased by his son David Bronk. He is survived by two loving step children: Benjamin Glass of Seattle, Washington, and Julianna Campos of Milton and many grandchildren, great grandchildren, nieces, nephews, loving spouses of his children and step children. He lived a long and complex life. The fruits of his life and work are apparent in everyone who knew and respected him.
No one could deny his incredible mind, his ambition for the disadvantaged, his beautiful family, and great tenacity. His friends and family will miss him and his poetic and sometimes cynical sense of humor. His laughter and wit will far outlive him.
Visiting hours, Tuesday, May 23, 2017 from 6 to 9PM at St. Michael's Episcopal Church, 112 Randolph Ave., Milton, followed by a night vigil closing with a Funeral Service Wednedsay, May 24, 2017 at 10 am. Interment is private.
In lieu of flowers, donations can sent to St. Michael’s Church, 112 Randolph Ave., Milton, Massachusetts 02186, for Adult Education; or to the Milton Art Center, 334 Edgehill Road, Milton, Massachusetts.