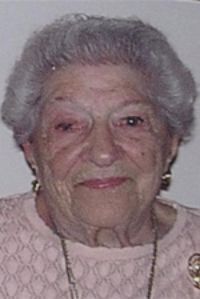 Evelyn (Pisani) Mobilia, 103, of Medford and Port Saint Lucie, Florida, passed away peacefully on February 12th at the Melrose/Wakefield Hospital in Hospice care after a short illness. She was the beloved wife of the late Anthony Mobilia, with whom she shared 50 + years of mairrage.

Born in Beverly on November 9th, 1913, Evelyn was the daughter of the late Michael and Rose (Yadisernia) Pisani. She was educated in the Beverly school system and graduated from Beverly high school in 1933. She was also a graduate of the Lynn Union Hospital School of Nursing. After marrying, Evelyn moved to Medford where she lived and raised her family. Upon retirement, she and Tony spent their winters in and Port Saint Lucie.

Evelyn worked at the Mass General Hospital for many years as a registered nurse. When she ceased patient care nursing, she worked in the admitting office at MGH until her retirement in 1983. She and her husband Tony were co-owners, along with her twin sister Margaret and her husband Tido, of the 1886 House in Beverly. Evelyn would work at the hospital during the day and then drive to Beverly with her husband, where they built up a successful business. She loved to read and go out to eat with friends. Evelyn was a devout Catholic, and until recently never missed Saturday afternoon mass at her beloved St. Joseph Church.

Evelyn is survived by her devoted son Charles, with whom she lived in Medford, and her daughter Margaret Ann Stamp and her husband Walter of Port Saint. Lucie. She is also survived by three grandchildren: Walter Stamp Jr., James Stamp and his wife Justine of New Hampshire, and Melissa Giarratano and her husband John of Port Saint Lucie; four great grandchildren: Joseph DaSilva, Christina and Steven Zagzoug, and Lea Rose Giarratano., all of Port Saint Lucie, and two great great grandchildren: Sophia DaSilva and Adrian David Zagzoug. She is also survived by four sisters: her twin Margaret Mirandi, Vera Flint, Gloria Durkee of Beverly, and Yolanda Essler of Danvers. Evelyn is also survived by many, many, nieces and nephews. She was predeceased by two brothers: Anthony and Michael Jr. Pisani, and sisters Ernestine Pinciaro, Josephine Cookson, Helen Rossi, Olga Stewart, Rosemary Pisani, and Shirley Levesque, all of Beverly.

Funeral from the Dello Russo Funeral Home, 306 Main St., Medford on Saturday, February 18 at 9 AM followed by a funeral mass celebrated in St. Joseph Church, 118 High St., Medford, at 10 AM. Relatives and friends are respectfully invited to attend. Services will conclude with burial at Oak Grove Cemetery, Medford. Visiting hours Friday, February 17, from 4 through 8 PM.