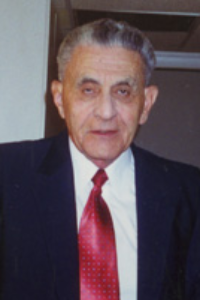 George Xintaras, 90, of New Bedford died Monday, January 2, 2017 at Hathaway Manor after a long illness. He was the husband of Alexandria (Boza) Xintaras.

He attended Northeastern University in Boston where he earned a Bachelor of Science in Business.

George was a dedicated communicant of St. George Greek Orthodox Church, where he was the chantor for most of his adult life and was also a member of the choir.

He was the manager of Stop and Shop supermarkets and supervised local Cumberland Farms Stores until his retirement. In his retirement, he worked for the Alternative Students' Program for New Bedford Public Schools where he enjoyed building relationships with the students.

George had a passion for life and people as well as his Greek heritage. He enjoyed spending time with his family, watching sports on TV and taking great care of his yard.

Survivors include a daughter, Dianne Camara and her husband Glenn of Fairhaven; a granddaughter, Lauren (Silva) Newhard of Tampa, FL; two brothers, Charles Xintaras of Cincinnati, OH and Zachary Xintaras of Paris, France; and several nieces and nephews.

His Funeral Service will be held on Friday at 12:30 PM at St. George Greek Orthodox Church, 186 Cross Rd., Dartmouth. Burial will follow in Pine Grove Cemetery, New Bedford. Visitation will be held at Church from 11:30 AM - 12:30 PM, before the Service. In lieu of flowers, memorial donations may be made to the Alzheimer’s Association, 480 Pleasant Street, Watertown, MA 02472. For online guestbook, please visit www.saundersdwyer.com.